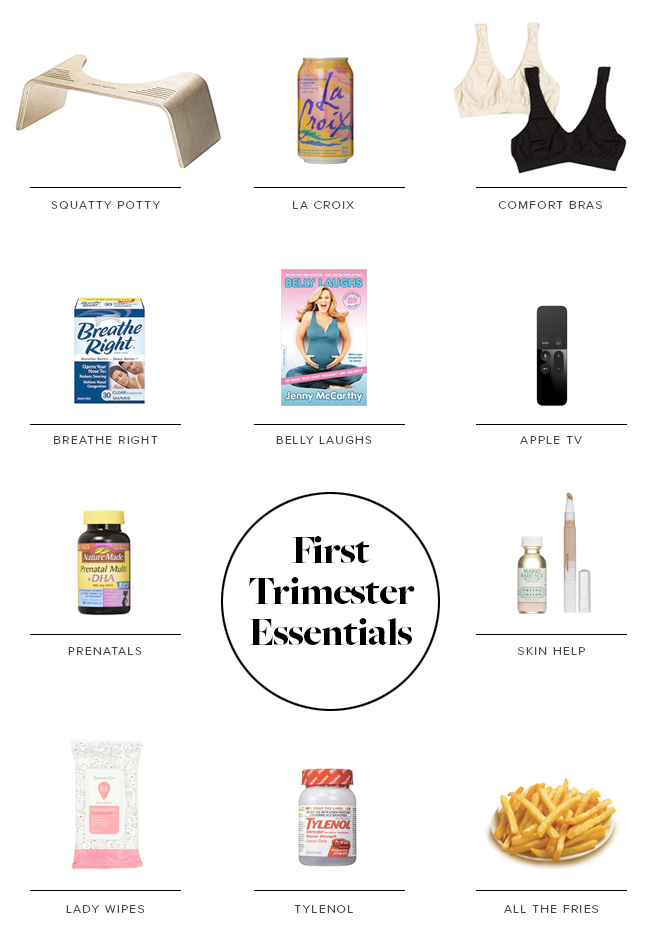 now that i’m almost halfway through my pregnancy and well out of the first trimester, i thought i’d round up the things i couldn’t have lived without during it. the first trimester is hard, your body is changing so much and your emotions are all over the place and you basically just have to take it one day at a time, and know that it’ll get easier when you just get to the second one.

i’ve been very lucky to have no nausea, but i was incredibly fatigued throughout the first trimester, and i’ve never been a napper but i was taking daily afternoon naps and was generally pretty useless a lot of the time. my boobs also grew humungous overnight and i was getting frequent headaches, so it was a blast obvs. pretty happy to be in the second trimester which is much easier as you’ve been told. some of this may be TMI but i feel like pregnancy is pretty gross in general so it’s all good.

SQUATTY POTTY ok maybe this really is gross to talk about, but since becoming pregnant, it’s been way more comfortable to keep my legs up to make doody lol. a lot of women deal with constipation so i’d try lifting your legs if so.

SPARKLING WATER i’ve always lived off of it, but it always helps soothe any gas or sour stomach feelings pretty instantly. if you don’t have a sodastream and have wanted one, now would be the time.

COMFORT BRAS not only did i bust out of my bras pretty immediately, the underwire was really uncomfortable and it took a little while to get used to much larger breasts, so wearing comfort bras around the house and to sleep when i’d usually not wear a bra felt more comfortable than them swinging around everywhere.

BREATHE RIGHT STRIPS i told you i’ve been congested since day 1, and unfortunately i got hooked on nasal spray a few weeks ago because of it — i was able to ween off (by only squirting in one nostril), but i realized that was bad so i’m officially off it now — i’m still sniffly but i can breath and i’ve liked wearing these strips to sleep in when i’m feeling extra sniffly. (the only thing i don’t like is how hard they are to peel off in the morning and the gunk they leave behind). you could also use a humidifier if you’re struggling with this.

BELLY LAUGHS was the first and only pregnancy book i’ve been into — she wrote it before she went nuts about the vaccines, so don’t worry — it’s just about her experience being disgustingly pregnant and i was laugh crying through it. you need to read this when you’re just starting out with all these horrible symptoms and will be so relieved to see how common they are all. and laugh about them. (and here’s gids favorite so far, for all the husbands)

APPLE TV being so tired everyday, a lot of times i would get in bed and watch something when i felt like i had no energy to do anything else. it kind of felt like mono (which i’ve never had lol) and i had no idea how this feeling would ever go away, but so glad it did.

PRENATAL VITAMINS i started taking them before we started trying to have a baby to just get in shape for it, but i’ve switched brands a few times now and i like this one the best. it’s a super large pill (if you’re not good at swallowing pills, you might not be able to deal with this one) but i prefer taking this one a day to like 7 a day like some of the other brands.

DRYING LOTION / CONCEALER pregnancy acne is another fun symptom i dealt with, and i couldn’t sense it coming on at all — i’d just wake up with a huge cluster of zits and freak out. i’m sure some people wouldn’t approve of using it, but this drying lotion on zits to dry them out works really well for me and they go away quickly — and i’ve also started wearing concealer which i never did before.

SUMMER’S EVE WIPES ewww but yeah you need these. is there another word thats less intense than discharge? well there’s a lot of discharge daily and to feel clean, i’d recommend getting a large pack of these.

TYLENOL you can’t take ibuprofen during your pregnancy, and some people don’t take tylenol either, but my doctor said it was fine and it was life saving because some of the headaches i’d get were horrible.

ALL THE FRENCH FRIES everyone’s asked what my crazy cravings were, and the only constant has been wanting fries with basically every meal. i know that’s probably contributing to the skin issues but stop judging me i’m pregnant.

i hope this was helpful — would love to know what your essentials were or are!