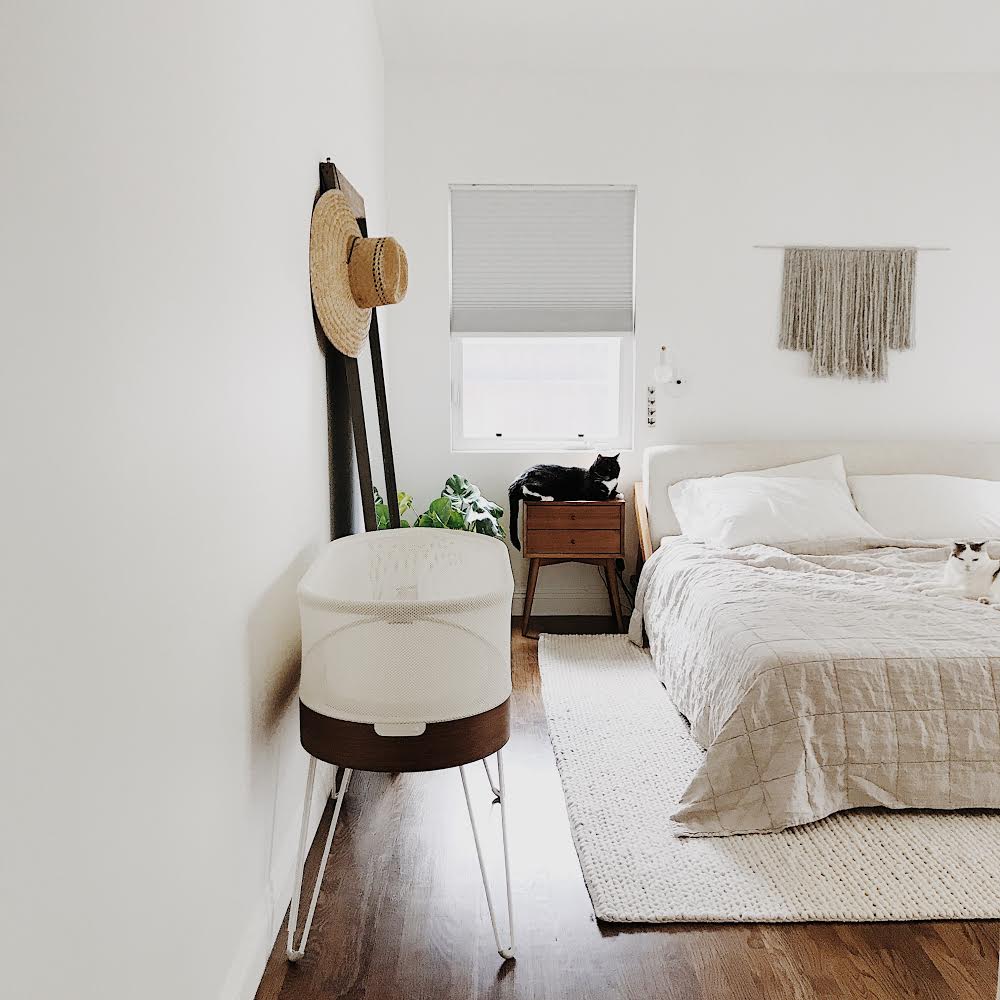 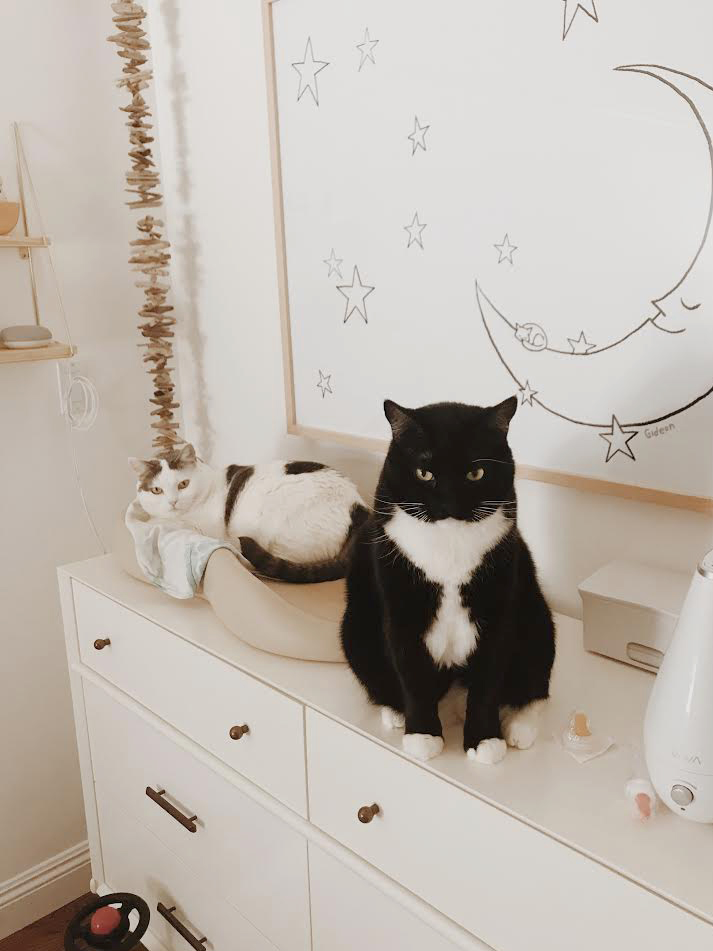 during my pregnancy, everyone made me completely freak out about “my plan” for the cats. people would ask us if we were planning on getting rid of them, warning us about how they could react to the baby, basically as if i didn’t have enough to worry about already — now i had to panic about the cats killing arlo.

our cats are pretty gentle, rocky can be a little feisty and as you well know at this point — the two girls fight, but overall, they are all very cuddly sweet cats, so we felt pretty confident they would never be aggressive with arlo, but obviously we had no real way of knowing.

we heard that we weren’t supposed to let the cats sleep in our room anymore once the baby slept with us, because of old wives tales. we spent a week or two worrying about how this transition would already be so hard for them, but now they’d be kicked out of our room as well… and we knew they would just sit at the door and claw and meow all night, so we decided to not listen and just let them sleep in our room, and it was absolutely fine! it worked out in our favor that the cats were terrified of arlo, so they stayed away mostly. 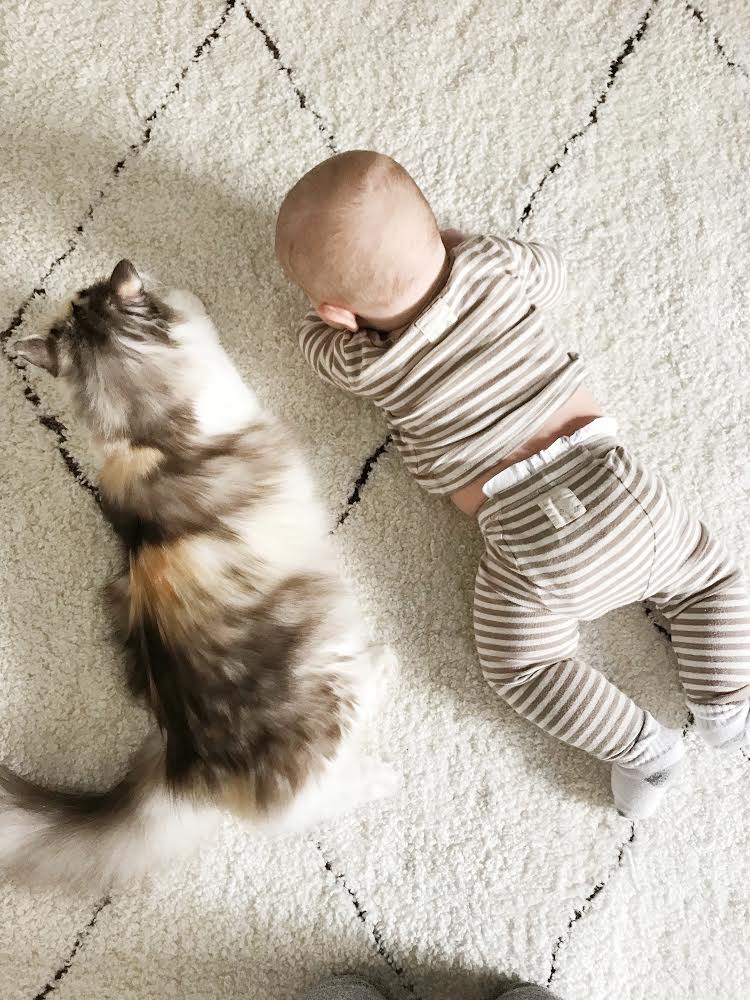 i saw this story on sunday morning about bobby flay growing up with a dozen cats and i thought it was the cutest thing ever. and that’s arlo!! honestly i love the cats but he REALLY loves the cats. they make him so happy on a daily basis that i cannot imagine our life without them to make him smile.

he harasses them very regularly and has since before he could crawl. he has always been completely fascinated by them (how can you blame him they’re like giant moving stuffed animals), but it’s so amazing to see the way they’ve familiarized with each other. even though they’re basically still terrified of him, they just let him grab them and chase them and lay on them. 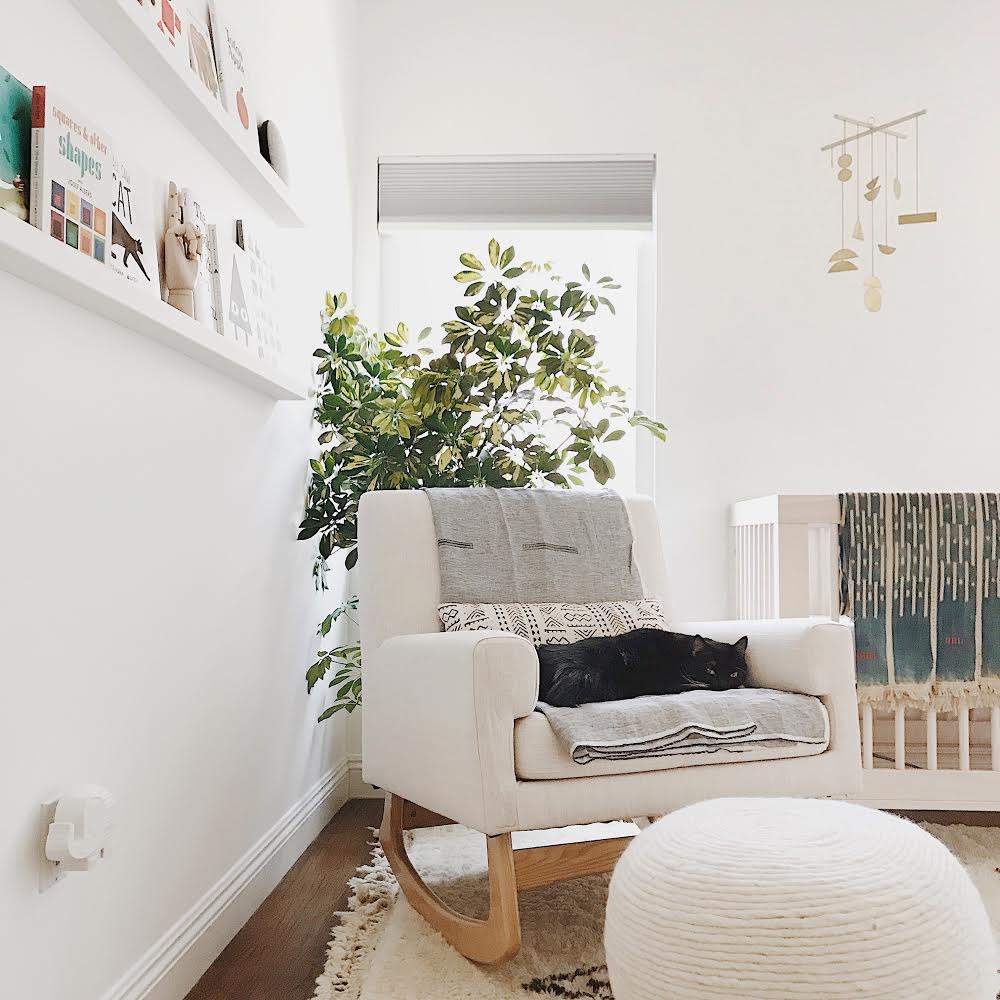 obviously the risk of toxoplasmosis is frightening af. our cats are all indoors and we’ve never let them outside so that part was less dangerous for us, and luckily during my pregnancy (and forever), gid was responsible for cleaning their litter boxes always. just be safe and wash your hands often, i also made a point to not touch their paws much during my pregnancy.

you’ll also want to make sure you can keep your cats claws clipped, bodhi and lucy allow us to clip their claws since we’ve been doing since they were kittens — but i’m pretty sure rocky never had hers clipped her whole life so it’s a GIANT ORDEAL. if your cats scratch you, you should assume you need to keep them clipped. get in the habit of this before baby arrives! 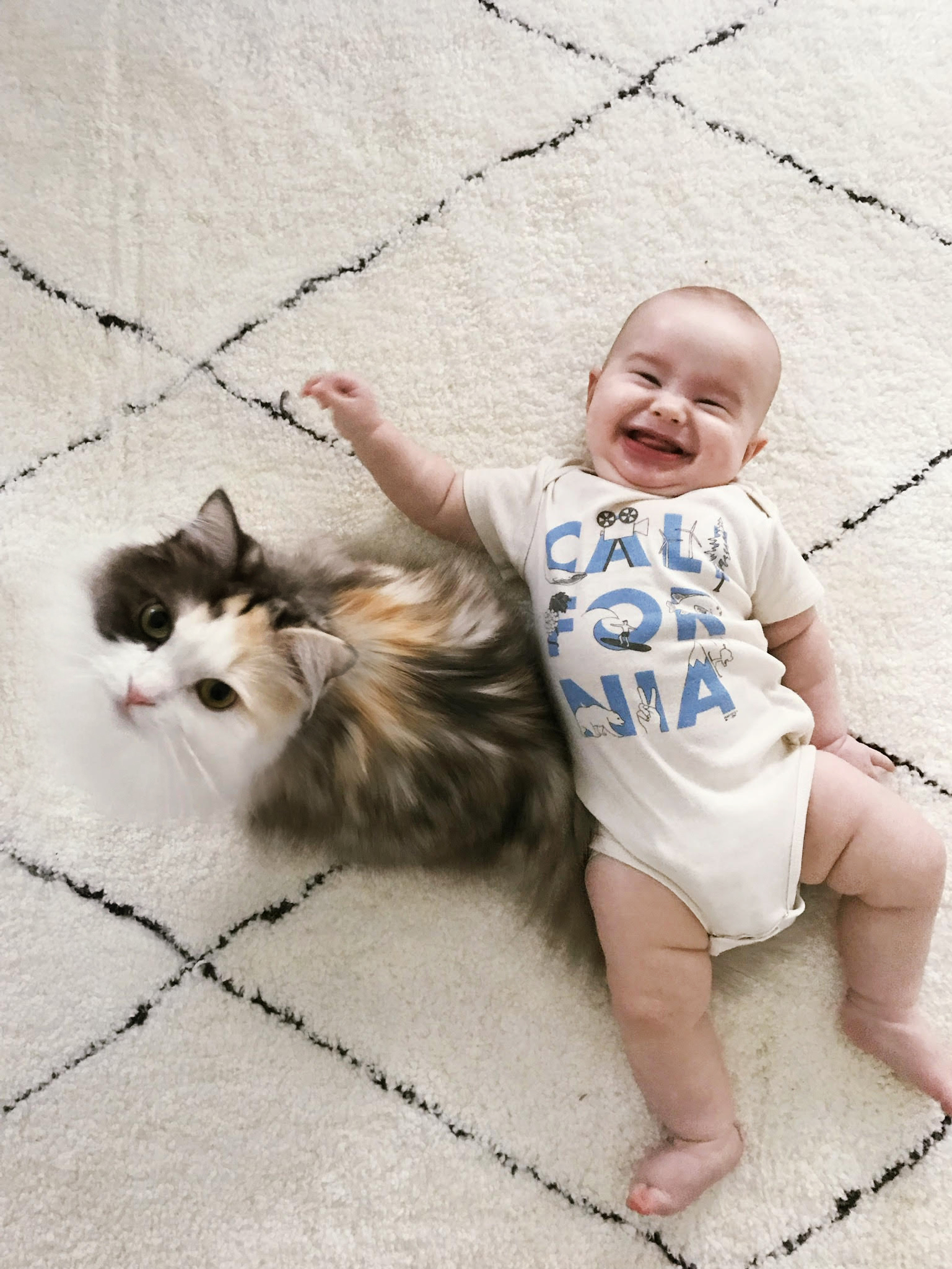 we were told to play the sounds of crying babies for them to get used to it — but again, we decided we didn’t really want them to be used to it. that’s personal preference and based on our cats personalities, if you have an angsty or very anxious cat, i would try it! you could also just show them youtube videos of babies.

set up as much of baby’s room and things as you can, so they can get used to everything. we didn’t make anything off-limits for them in the beginning so that they could really acclimate to the nursery. and boy did they lol — they were so grateful for their new room!

a few weeks before arlo was due, we started making their favorite nap spots less comfortable for them, we filled the crib with tin foil (which honestly didn’t deter them nearly as much as we’d hoped), we would shoo them off the changing table, etc. i did worry a little that they still wanted to sleep in his crib, but by the time arlo took his first nap in there, they never went back in again. they still love his chair and changing pad, but that doesn’t really bother me. over a year later and bodhi is almost always in arlo’s room sleeping on his rug during the day.

another idea to help the transition is to get the cats used to baby scents, rub baby oil or baby shampoo on your hands before you play with them, wash your bedding in baby detergent, etc. the comfort zone diffusers are also a perfect and easy way to calm their nerves day to day. 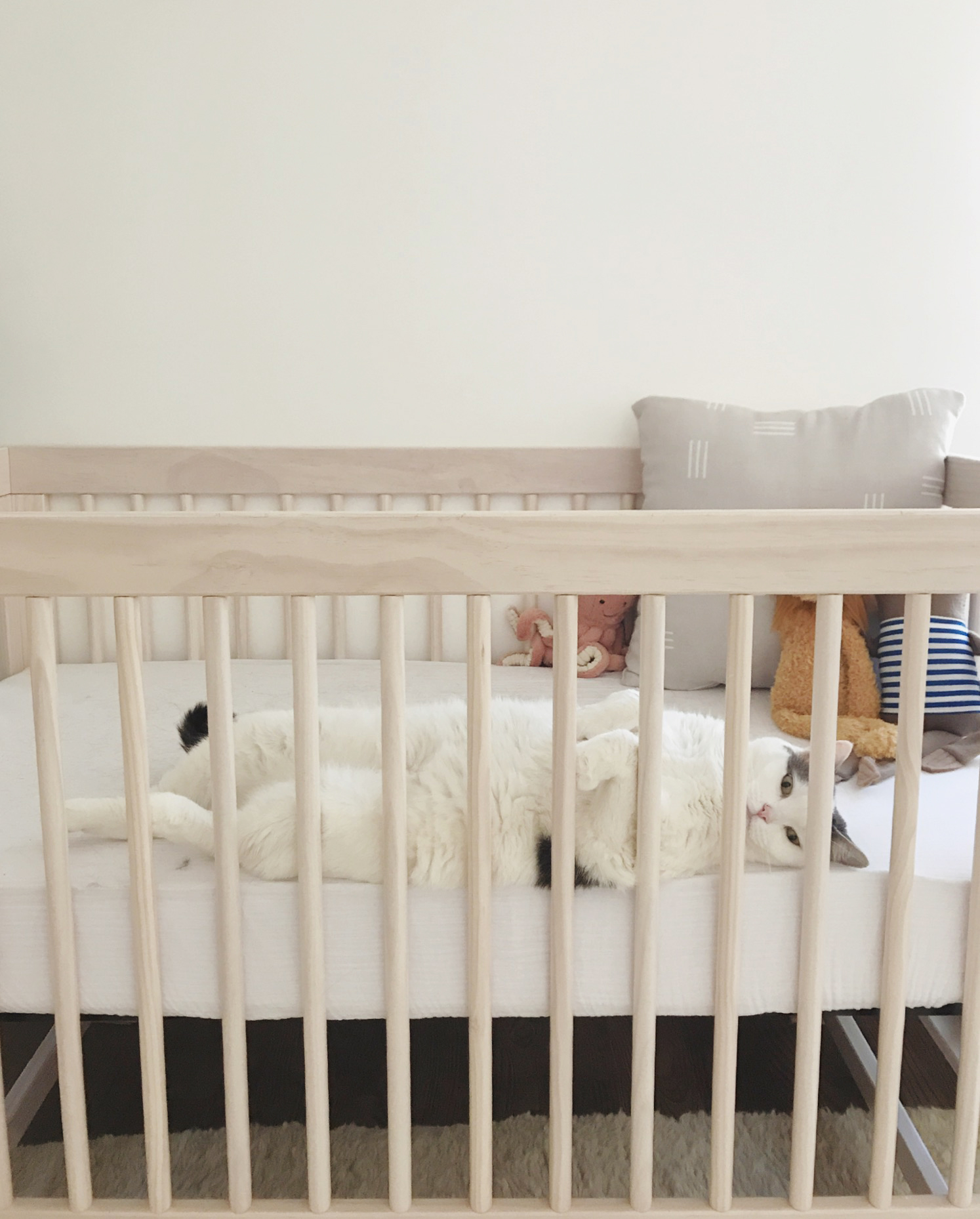 after arlo was born and we were at the hospital for a couple days, we had relatives bring home some of his swaddle blankets and lay them out on our bed to get them used to his scent. place them wherever your cats like to sleep most so they are guaranteed to check it out.

let them investigate baby, if they want to. our cats were waaaay too scared to do that, they would mostly hide in the corner and watch nervously, sort of like how i watch shark movies. after about a week, they started coming a little closer. they would try to sniff him during nursing or sleeping on me, and i would never shoo them away — making sure they were able to figure him out. the more time passed the more they would sniff and eventually come up and lay beside him.

we let them sleep in our room at night and they never even went near his bassinet, but during naps, if i wasn’t in the room i would close the door. once arlo started sleeping in his crib i would kick them out before closing his door as well. and like i said, they lost interest immediately in the crib once he started sleeping in there.

every cat is different and ours happened to be easy in this way, but if your cat seems a little wound up because of baby’s arrival, i would definitely suggest placing a comfort zone calming diffuser near the bassinet (if baby is sleeping in your room) as well as in the nursery. i have heard horror stories of cats spraying cribs and definitely better safe than sorry, especially if you had to move the litter box out of the room baby sleeps in now. there are also nets you can put over the crib if you’re paranoid about it. 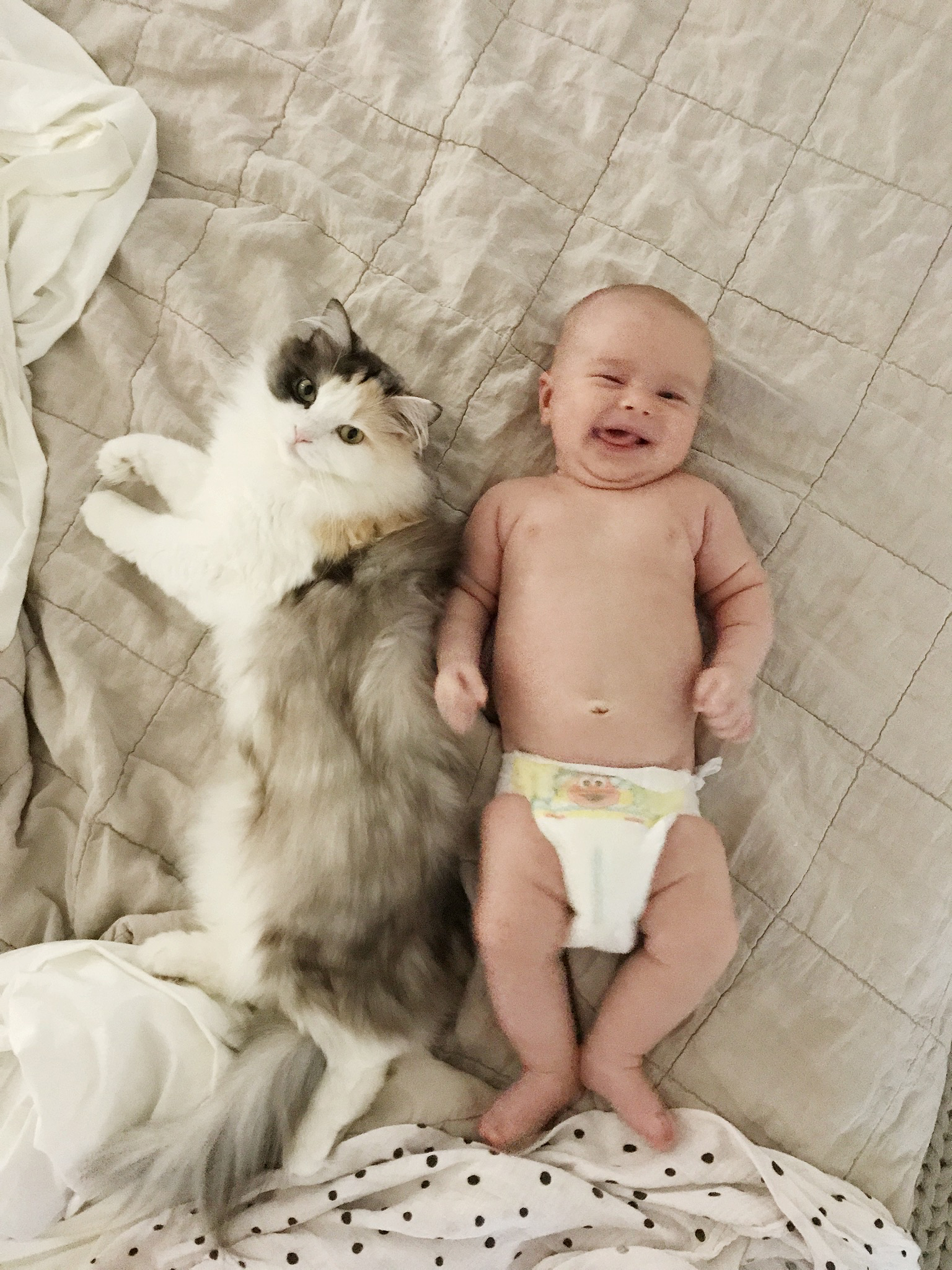 we were definitely making their comfort level a priority because we worried they’d act out if they got too pissed about a new baby coming and stealing all their thunder. so we made sure to cuddle and pet and groom the cats as much as we could while arlo was sleeping. this way, they still felt loved and special and were actually pretty nice to arlo.

it has been so special to watch arlo grow up with the cats by his side. i do think they have acted out in the guest room because of the stress of arlo’s arrival, but if you take all the precautions and use the diffusers — you don’t need to just get rid of your cats because you’re having a baby. they can all live harmoniously together.

we have always said we think they get “where their bread is buttered” because of how chill they’ve always been with arlo, despite the constant tormenting he does whenever he sees them, chasing them around the house to snuggle them elmira style. i think they secretly sort of like him. 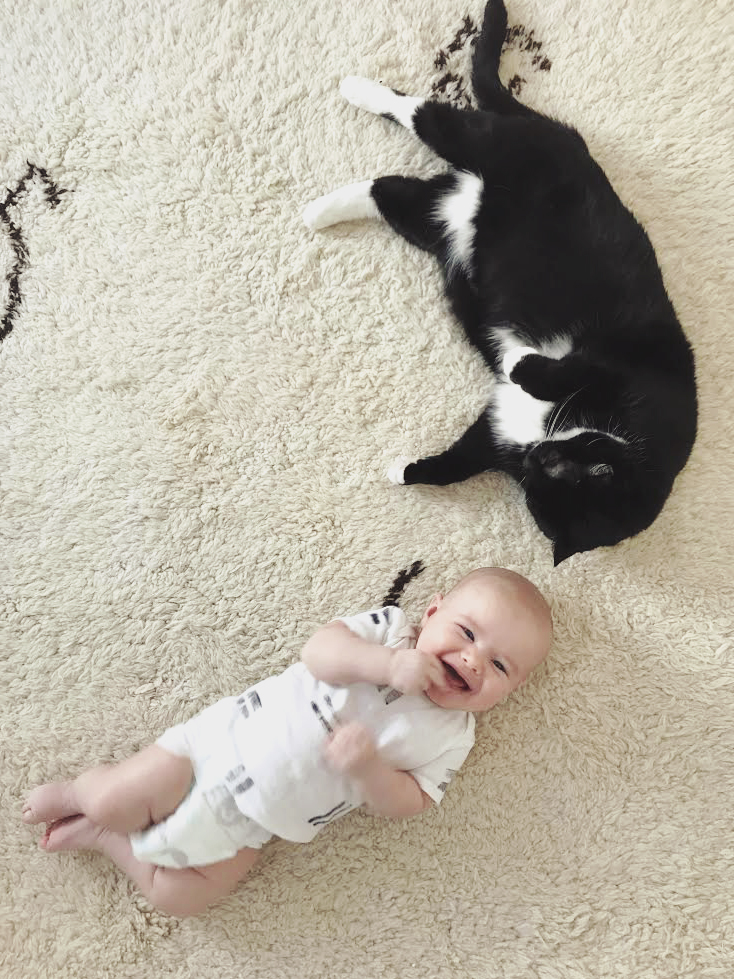 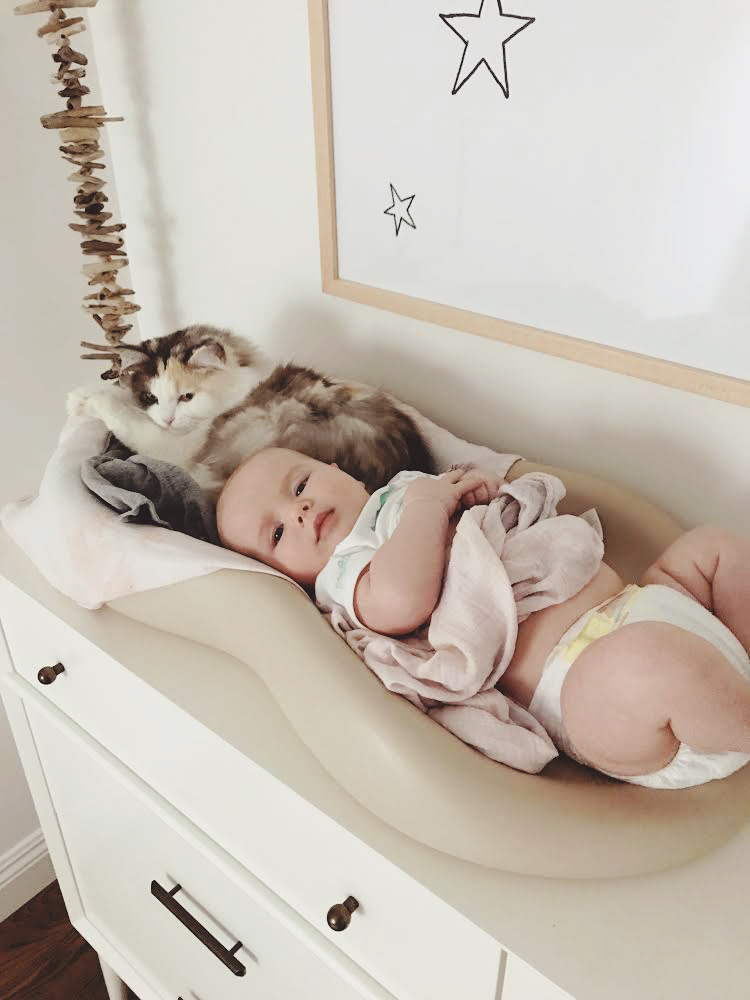 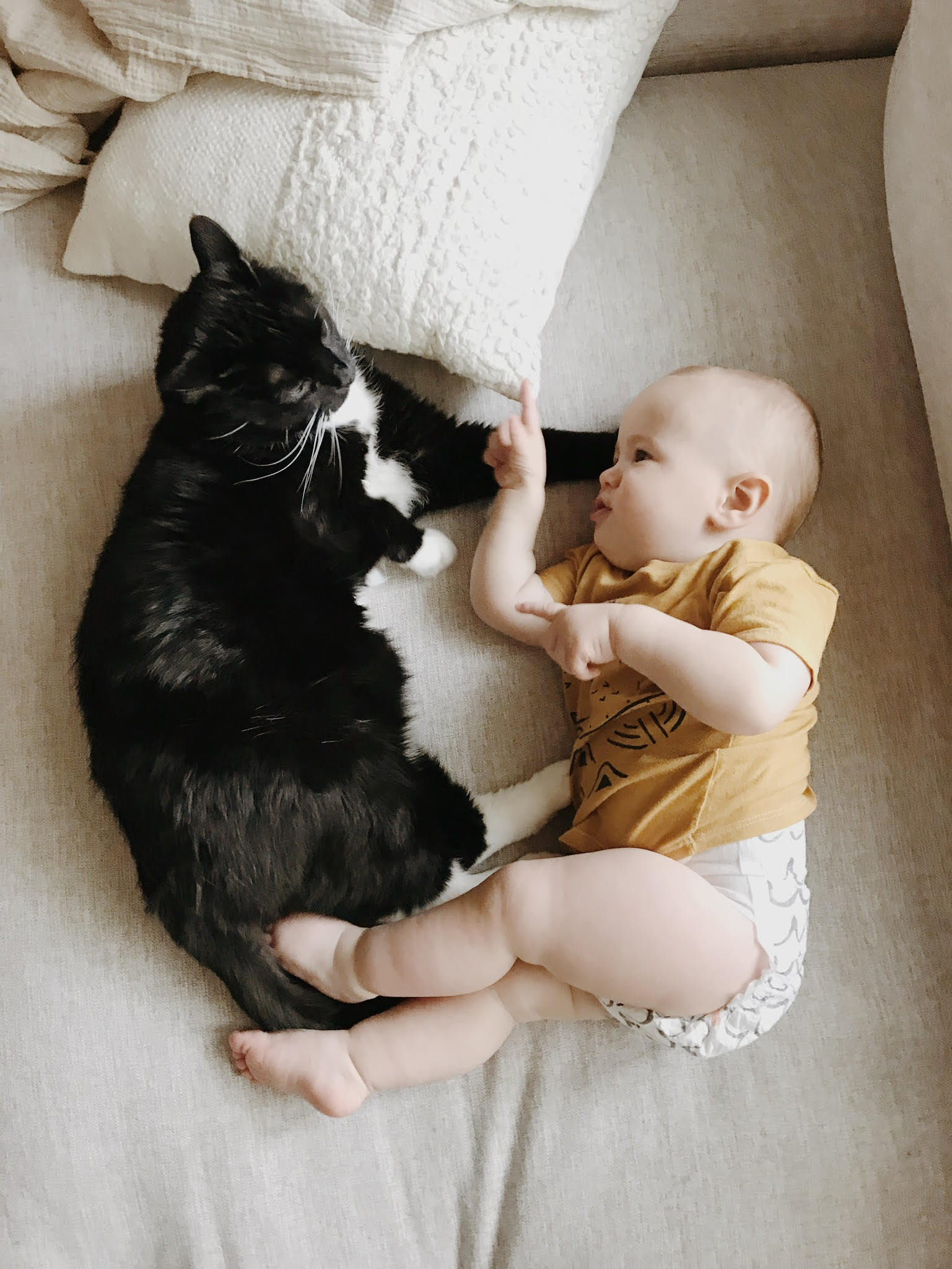 3 comments on “bringing a new baby home to cats”