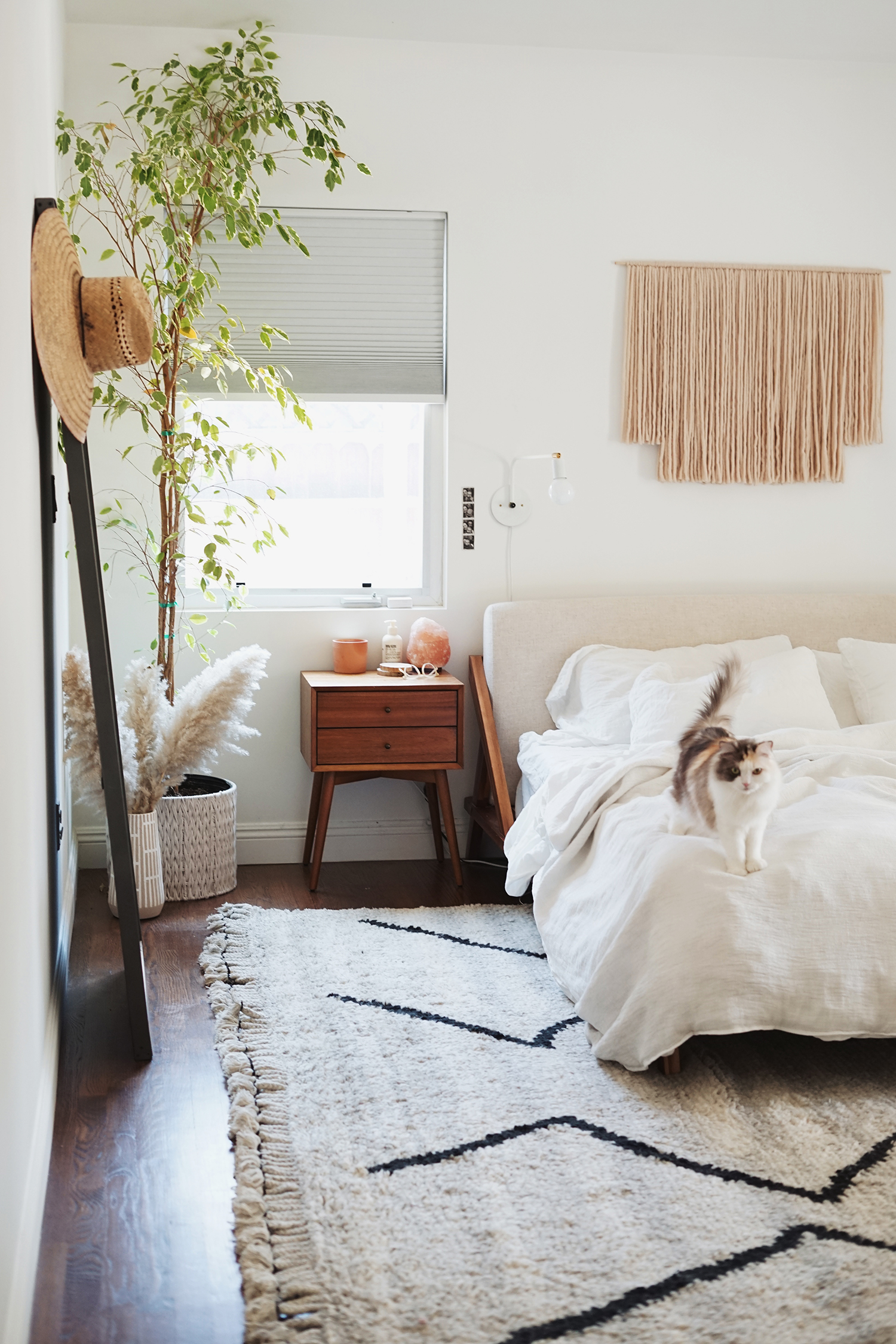 while it feels like we haven’t done everything right with the cats, we did make sure to do a proper introduction of rocky when we adopted her. i have actually been meaning to share our tips for years now, so i’m really glad that my partnership with comfort zone is motivating me to finally do it!

it’s sort of cathartic to write about this now because i was OBSESSED with rocky. she was my baby before arlo, and it’s so funny to remember how close we were back then. we’re still close and i still hold her and sleep next to her, but it’s definitely different. so this is kind of nice for me to write to remember the old days.

cats are so weird. i never had cats before the ones we have, so everything i know about them has been learned over the last few years. i am not an expert, but i do know that nothing is simple with them, so introducing cats to each other is basically a month long process because they are some hiiiiiiigh maintenance creatures. we took a lot of precautions because we really wanted to make sure they all liked each other. 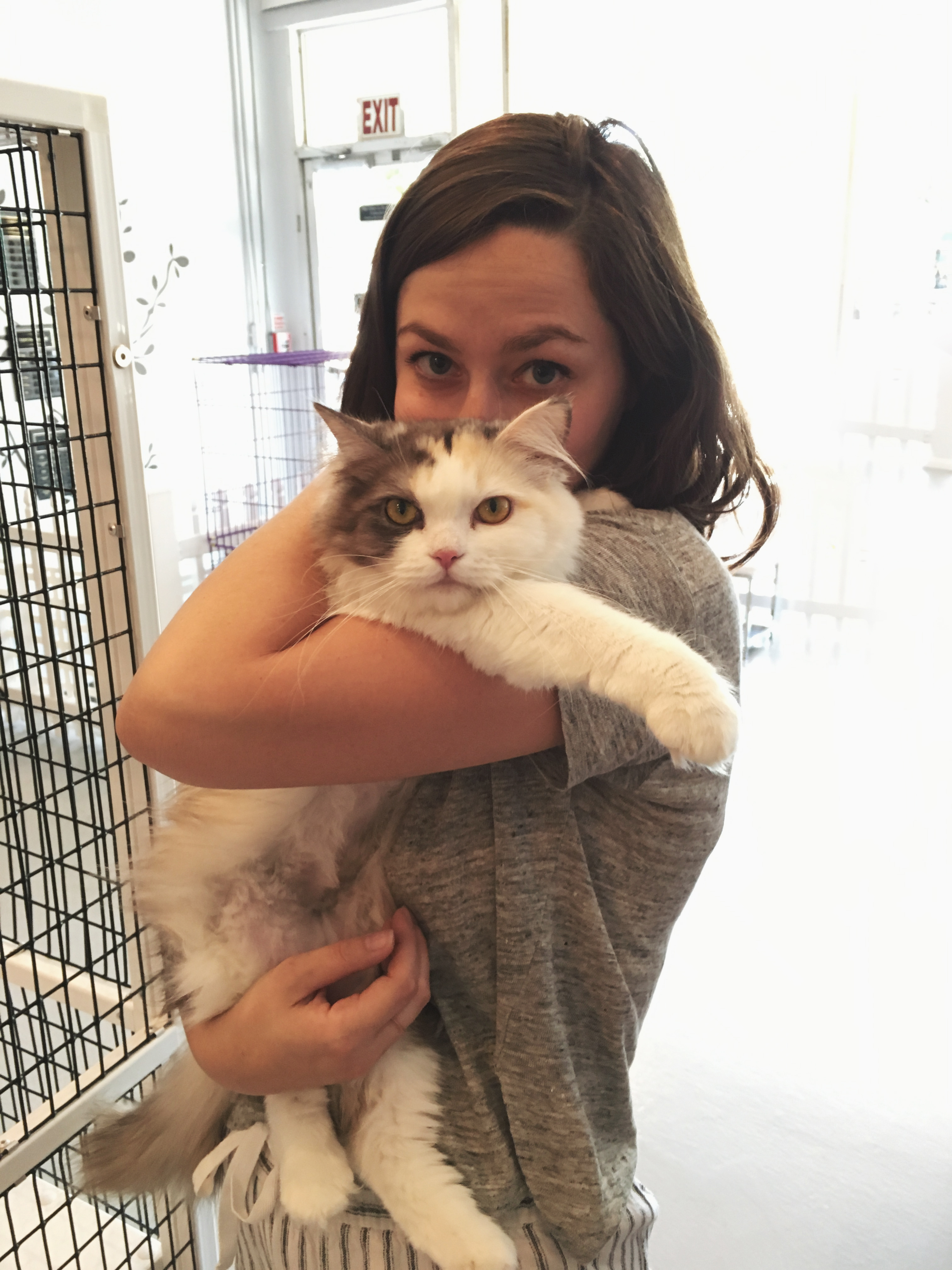 i didn’t plan on adopting a third cat, i just happened to walk by and see rocky sitting in a cage and i just needed her. had i done some research before, i would have found out that two girl cats can be a disaster. it’s possible if rocky had been a boy, we still could have had problems between the two boys, but it’s definitely worth considering if you’re choosing a new cat! besides just gender, i’ve read you should try to get cats with similar demeanors and temperaments.

another thing to consider is whether the new cat comes from a home with other cats, or if they were alone. they might not play as well if they’ve been used to being solo! and check out if they’re getting along well with the other cats in the shelter.

i am a big fan of adopting adult cats because while kittens are sooooo cute and i love playing with them sooooo much, adult cats really need homes much more since everyone adopts kittens. the other great thing about adult cats is you can see how big they’ll be and actually get a sense of their personality and disposition. you also get to skip that rambunctious climb-up-every-curtain-and-swing kitten phase, bodhi and lucy were adorable kittens, but i do not miss them waking us up all night every night at all! rocky looks like a permanent kitten though, so we lucked out (she is only 7 pounds!), which we really deserved after our tiny little kittens bodhi and lucy turned basically into maine coons.

you might be able to just let some cats go free in their new homes and they’ll be fine — but you can also sabotage a relationship between the cats that could have been good! i was way too scared of messing things up, so we were very careful! we decided to keep rocky locked up in the guest room and the cats were free to the rest of the house when we moved her in. 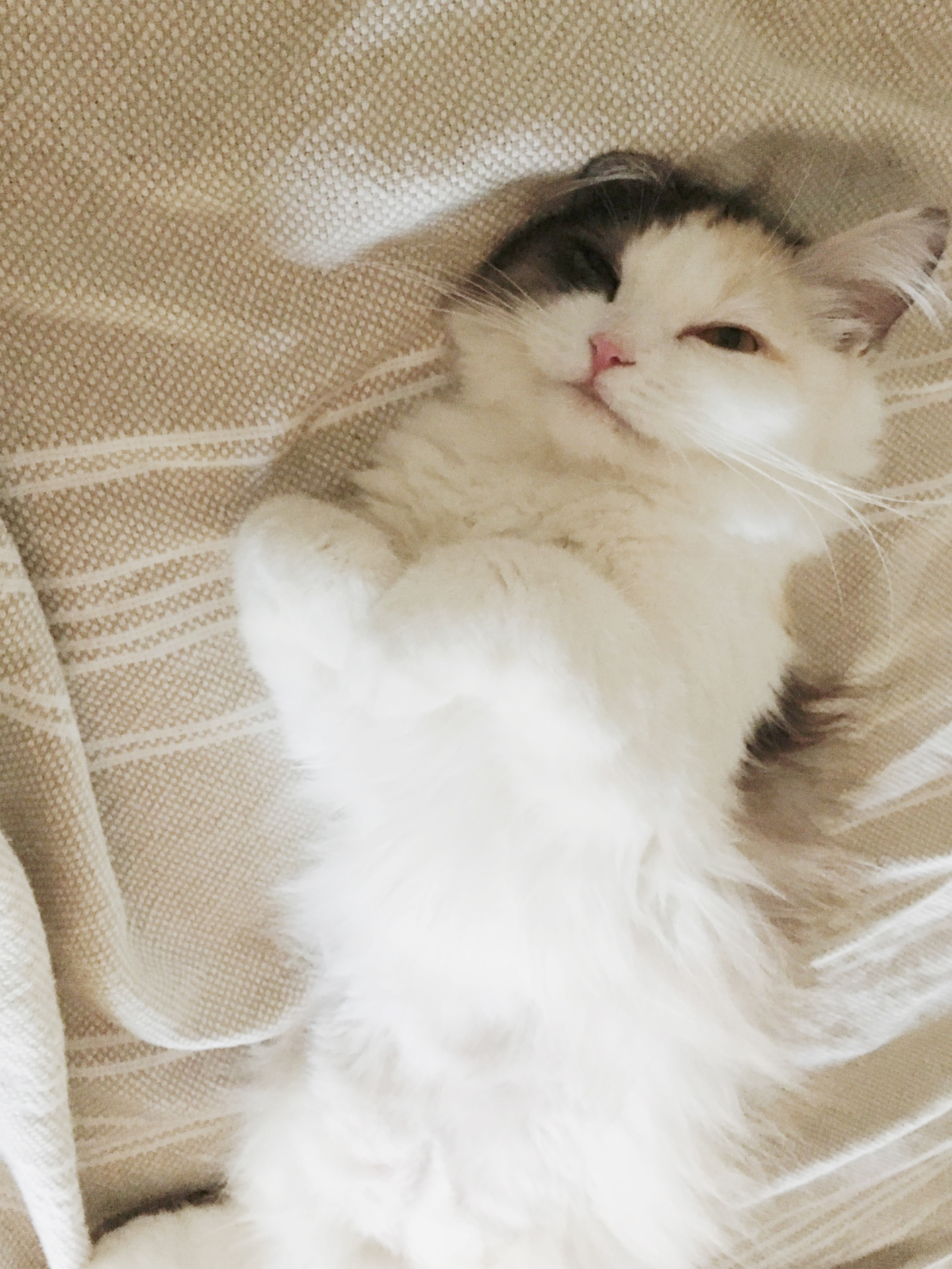 create a space for your new cat

when rocky first arrived to our house, we let our cats see her and sniff her for about 10 minutes. then we took her into the guest room and didn’t let her out for almost a week! it was sort of just like that first week home with a newborn haze — i slept in there with rocky and spent all my free time at home with her, we would cuddle and play and take selfies and i binge watched gilmore girls and she did cool tricks immediately like standing up (which she never does now). we filled the room with a litter box, lots of food, water and treats and toys. make sure your space is a room your current cats have spent time in.

we took some towels and blankets from under the cats and swapped them to get them used to each others scents. (you could also ask your shelter if you could take something before even bringing the cat home) let them sleep on them for a few hours and swap them.

create a calm vibe with diffusers

we put the comfort zone multi-cat diffusers in the hallway and near all of the doors they’d be near. they are proven to reduce conflict between cats! bodhi and lucy were basically huddled outside the guest room door, so it was crucial to plug them in. we also used the calming diffuser in the guest room for rocky to feel more comfortable in her new home.

feed them on opposite sides of the door

everyone associates eating with happiness, so we wanted bodhi and lucy to associate rockys scent and sounds with mealtime. we would feed all three of them right near the door so it was like they were eating with each other, and just one slow way they were getting used to each other. we also did this with treats! 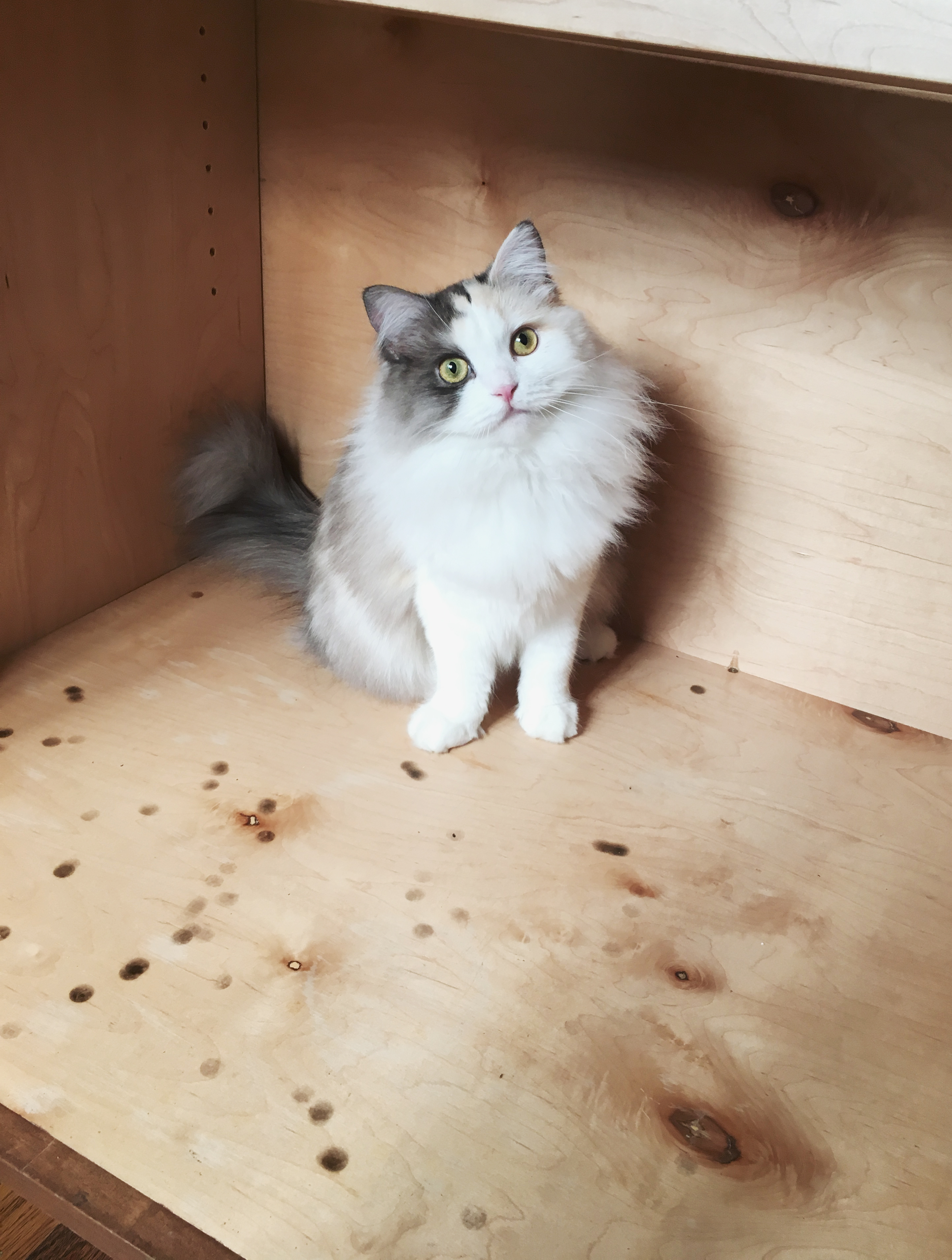 next we confined bodhi and lucy to the guest room, and we let rocky roam around the house. she was under the impression we had a very tiny house and was pleasantly surprised to see how much more space we had lol.

let them see each other

once they all seem calm and no one is hissing at each other, you can slowly introduce them. if you have a baby gate up, that’s an easy way to do a visual introduction. if you don’t, we held rocky at one side of the hallway and let the other cats walk freely on the other side. see how they interact, and if they seem sort of pleasant then you might be ok to let them actually meet.

we were honestly afraid about them getting together initially, rocky is so tiny and bodhi and lucy are so giant. but we knew eventually i would need to leave the guest room and take a shower (kidding, sort of). so we let them all freely check each other out. there were no fights or attacks or hissing in the beginning and we felt like we did it!! 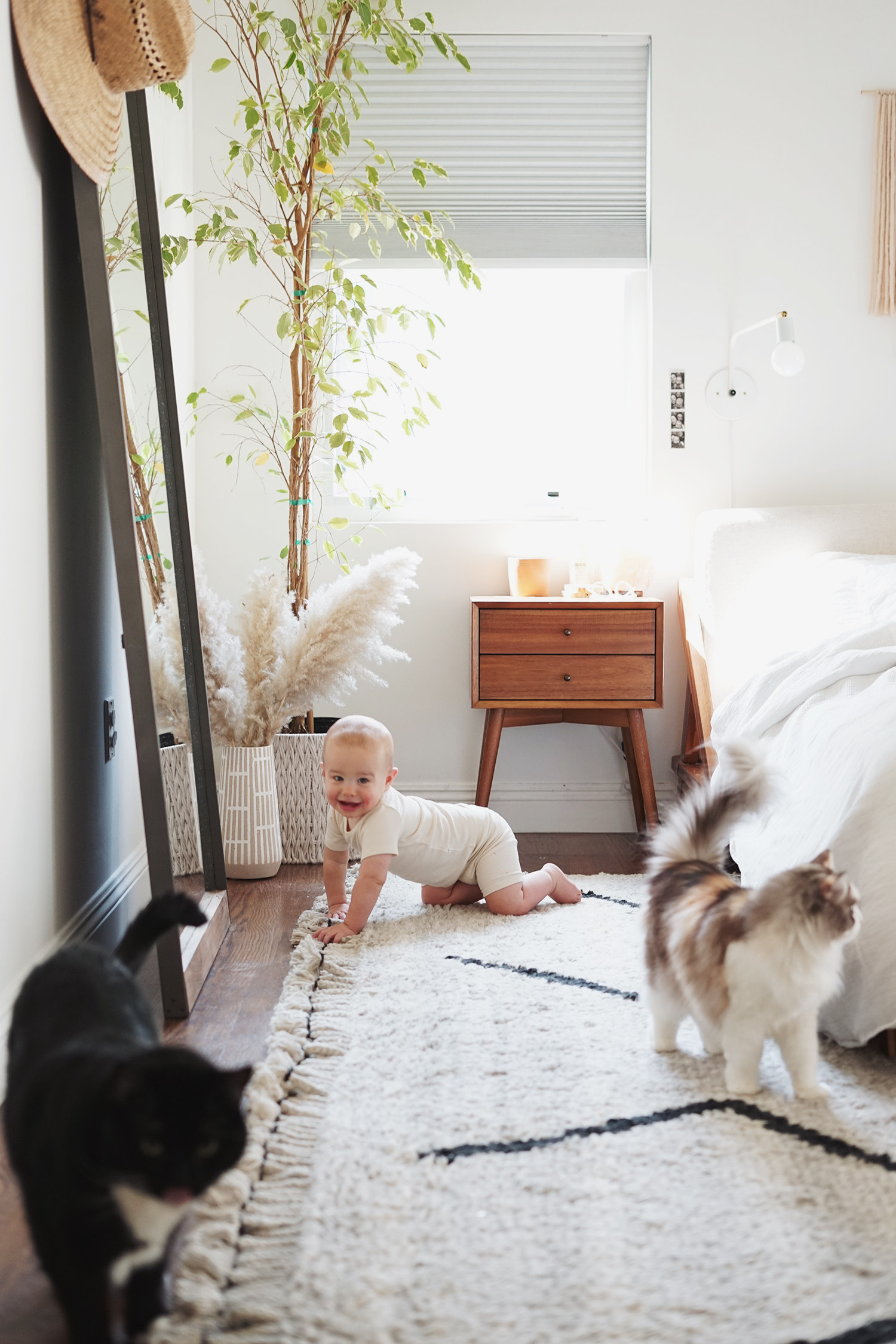 …until just a little later when the girls started fighting incessantly, for years. they can totally co-exist and they have definitely gotten better in the last few months, but it might just be a permanent friction because they’re both female, or maybe we screwed their intro’s up. either way, we have been more proactive about making sure to plug in comfort zone diffusers everywhere they hang out and it has definitely been helping relieve some of that tension. i also think the mutual terror of arlo chasing them every day has helped them bond!?

i hope if you’re considering adopting another cat, you’ll do it! it can be a lot of energy and time, but so many cats need homes, especially adult cats.