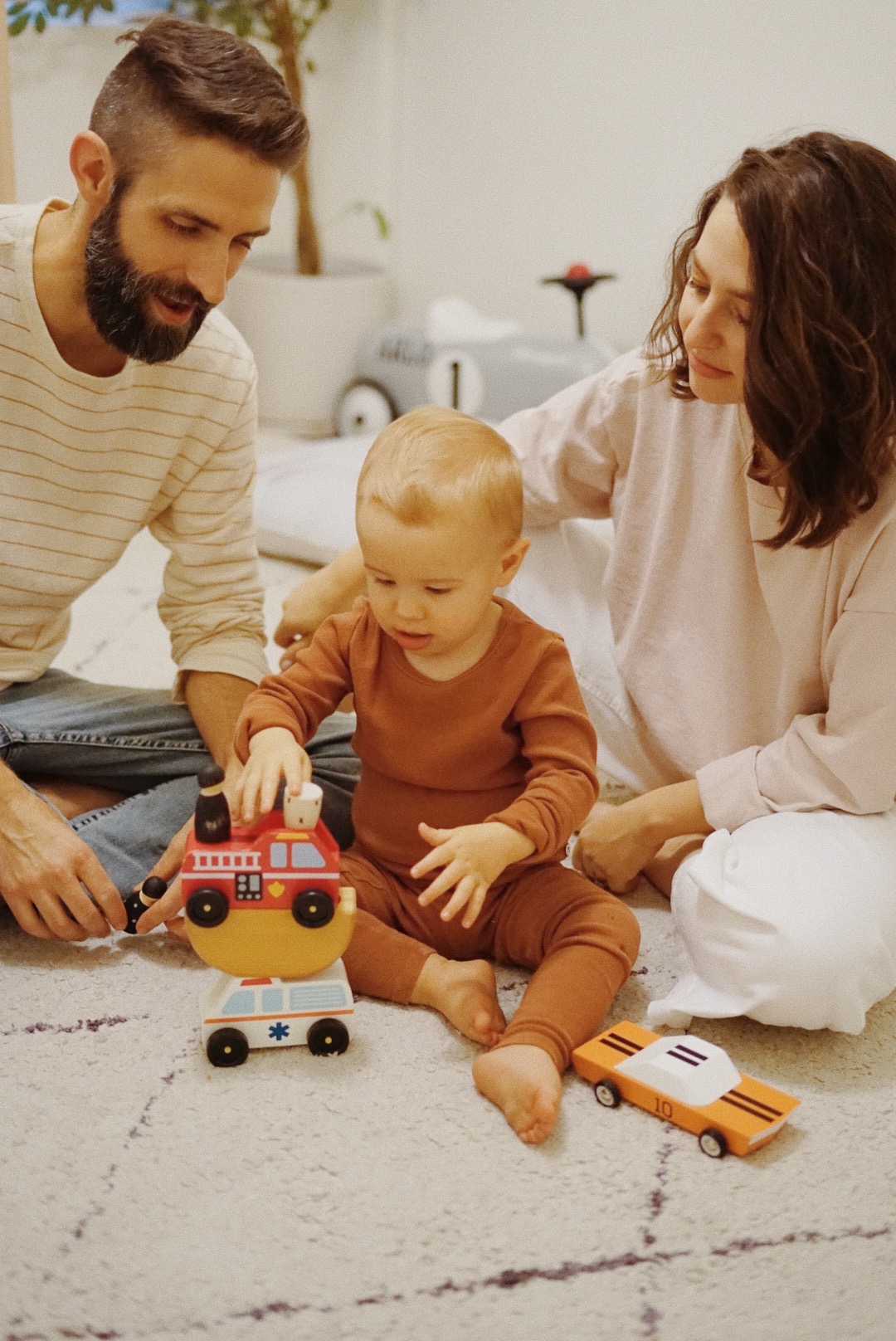 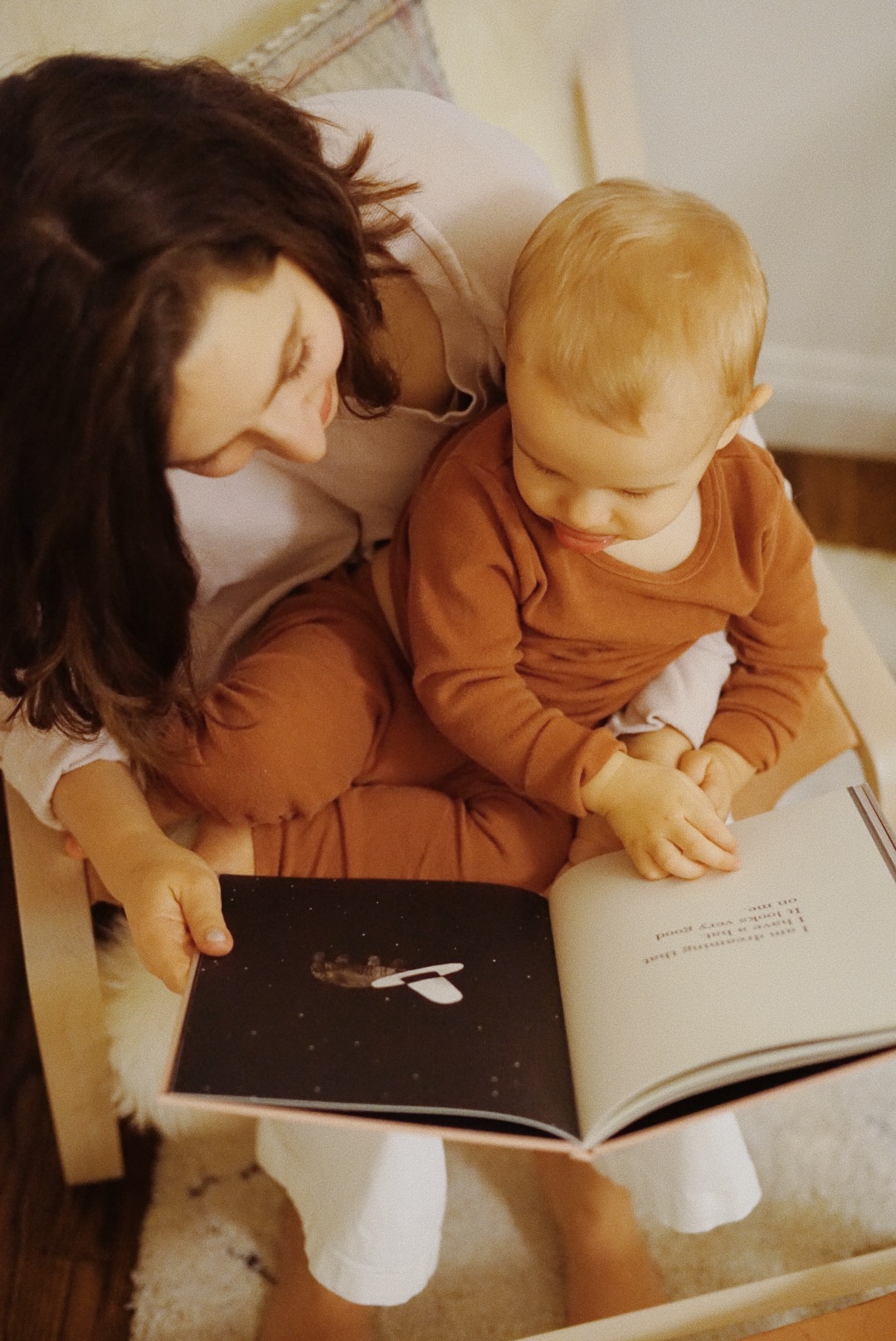 we get asked about all our routines with arlo a lot, so i’m always happy to have a reason to share! we’ve moved arlos bedtime around quite a bit, always trying to figure out what works best for us. he’s gone to sleep as early as 7 and as late as 9, right now we are aiming for 730-745, and his nap is usually around 1:45.

today i’m partnering with soraa to try out their soraa healthy bulbs, they’re the only LED light that doesn’t inhibit sleep. i had no idea, but blue light is “daytime light” and it signals your body to wake up. standard LED bulbs pump out invisible blue light all day long, even when it’s dimmed or “warmer” in color. so at night, blue LED light tricks your brain into thinking it’s still daytime and makes going to sleep harder. 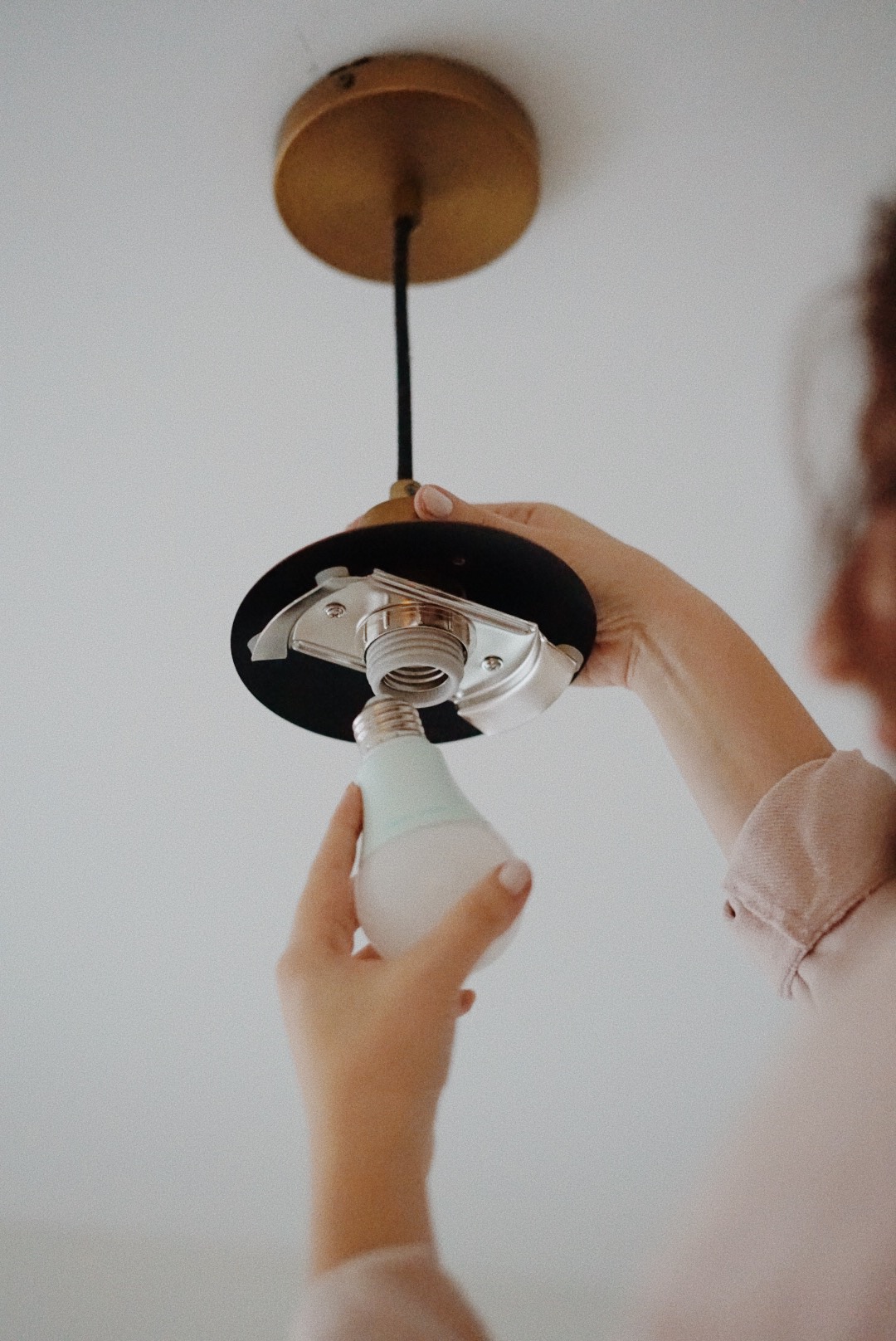 so here is our schedule, it’s pretty loose and like i said some nights he goes down much later than i plan sadly! the following routine is with us putting him down at 8PM. i like an earlier bedtime because it gives me more time to cook dinner and not have to eat so late, but gid doesn’t usually get home from work until 715 at the earliest, and he loves to see arlo before bedtime so it’s sort of all over the place some nights. we’ve also adjusted due to early wake-ups. it’s all about experimenting because you have no idea what will work and what won’t.

we had a phase where arlo started waking up (and screaming) at 530, so we pushed back his bedtime from 7 to 8 and it worked! then we went through a phase where he was sleeping too late, i think around 830am, so we pushed it back to 730. then when we switched to one nap, we pushed it back again. it’s all totally trial and error but at the moment, he’s sleeping until 745ish and we’re super content. really hoping not to jinx it!

around this time i’ll make his proper dinner and try to feed him as much as i can. if we’ve had a long day we might watch a little TV, but i try not to do that every night. we will usually play, i might start cooking dinner myself and sometimes we’ll do a bath. 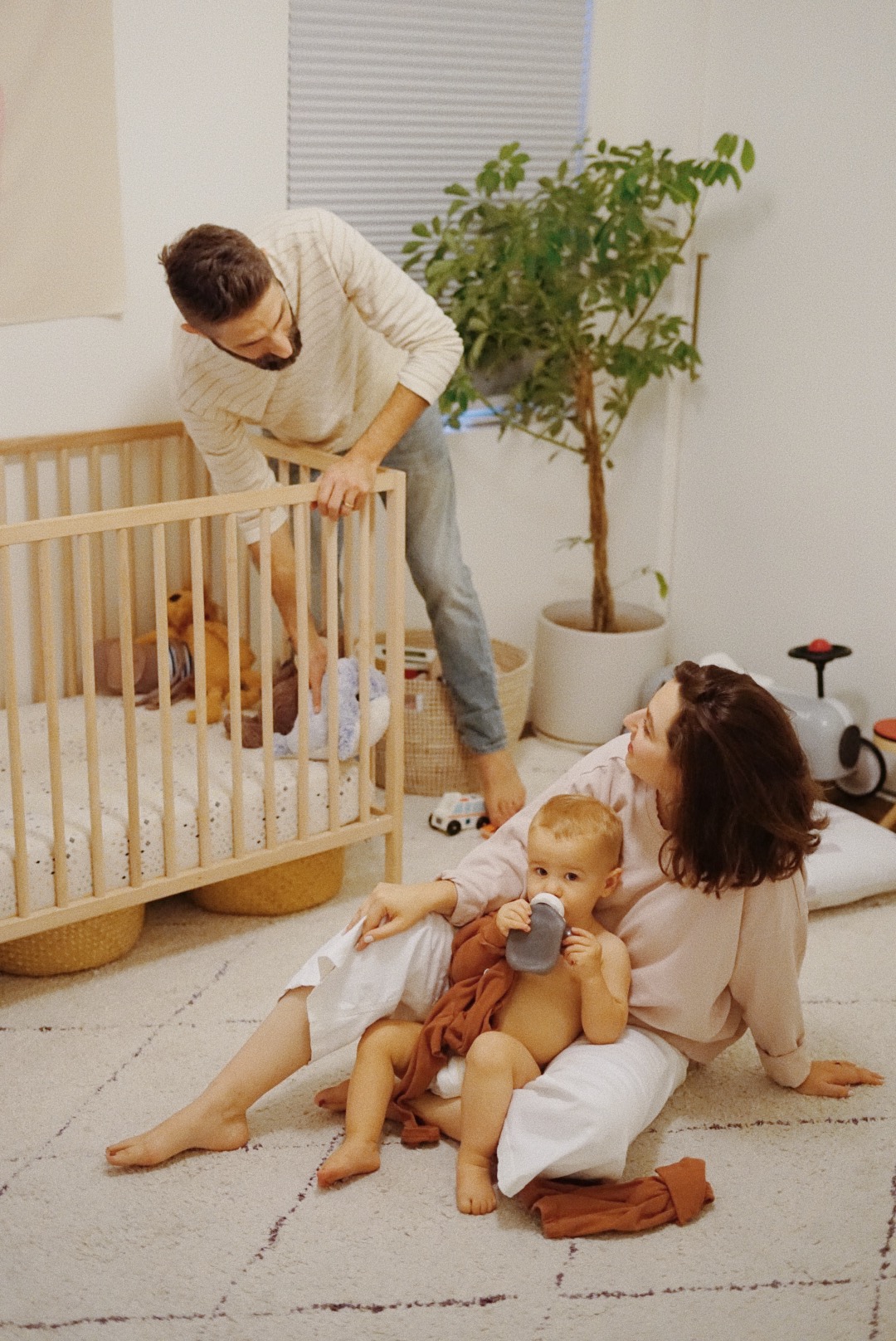 if the TV isn’t on, then we’re probably listening to music, so around this time we’ll shut everything down and try to get the vibe nice and chill. he gets PUMPEDDDD up when gid gets home from work so it’s important we remind him that bedtime is looming.

as you may have seen on instagram, we give arlo a pouch before bed and when he wakes up in the morning. when i weaned him from nursing, we tried every single kind of milk and he didn’t seem to like anything, so eventually we landed on 3/4 ripple milk and 1/4 drinkable probiotic yogurt mixed together. it would be much easier and cheaper if he’d just drink the milk straight, but he won’t, so it is what it is. some nights he’ll drink one, some nights he’ll want a refill. i just try to finish pouches before we put on his nighttime diaper. 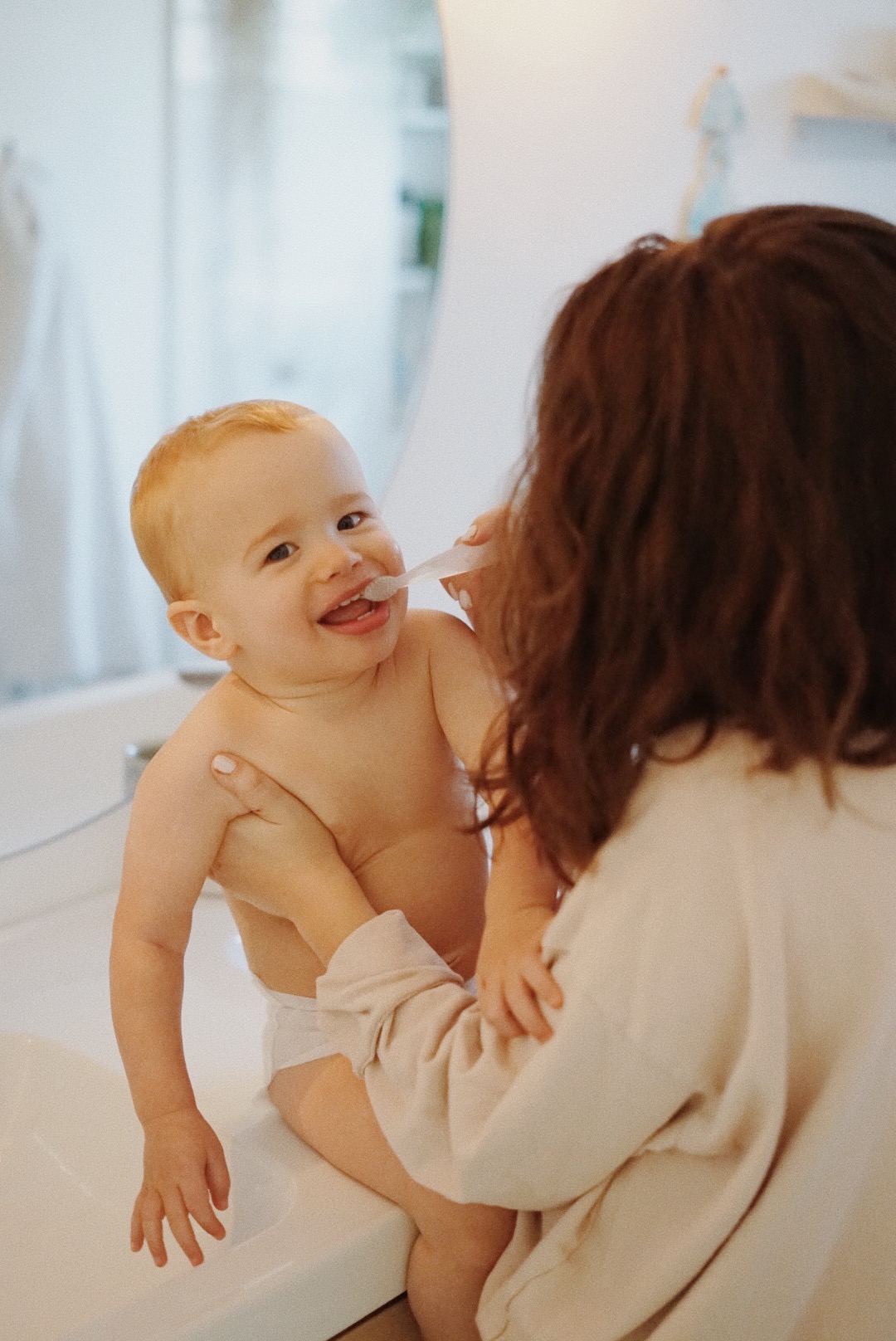 arlo loves to brush teeth and even has his little routines within his routine. he knows to spit, dry off his mouth, and turn off the light. next we go into his room, close the door, dim the lights a little, and put his white noise on at the lowest volume. we put him in his night time diaper (currently just using these in a size 6 (he wears a size 4 normally)) and i put on his pajamas. we close the blinds and setup his stuffies so they’re not all over the place in his crib, instead we place them all along the sides lol. 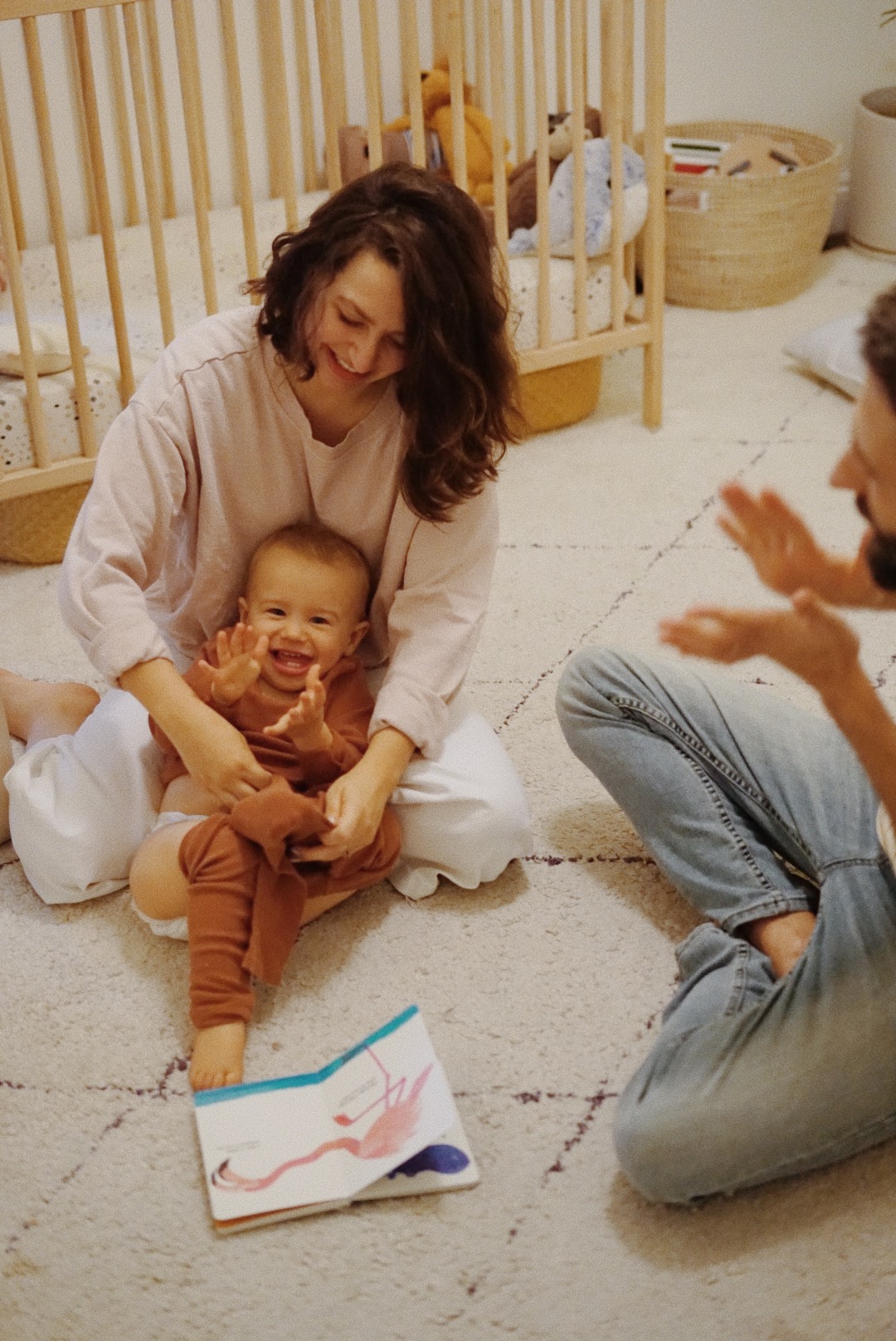 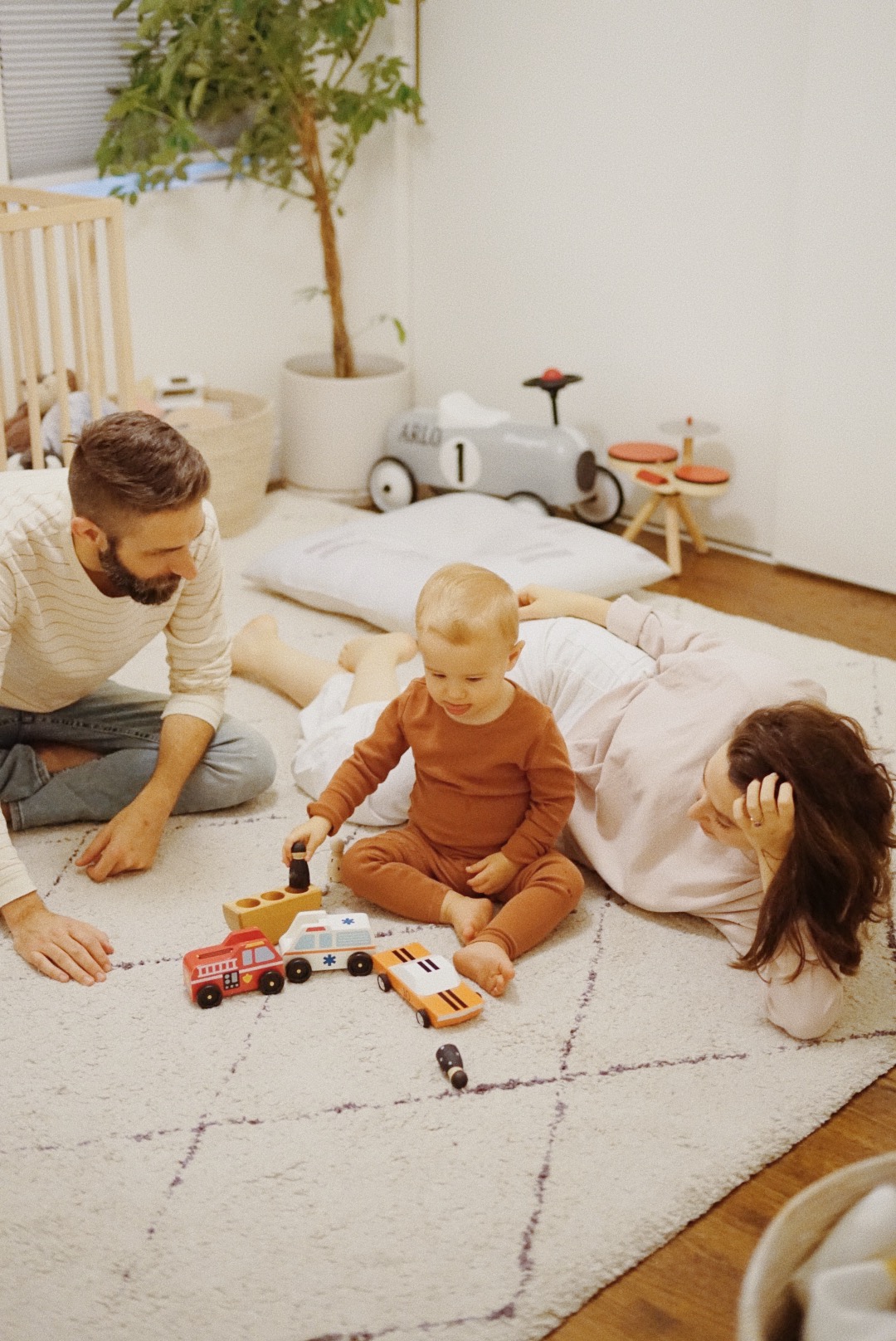 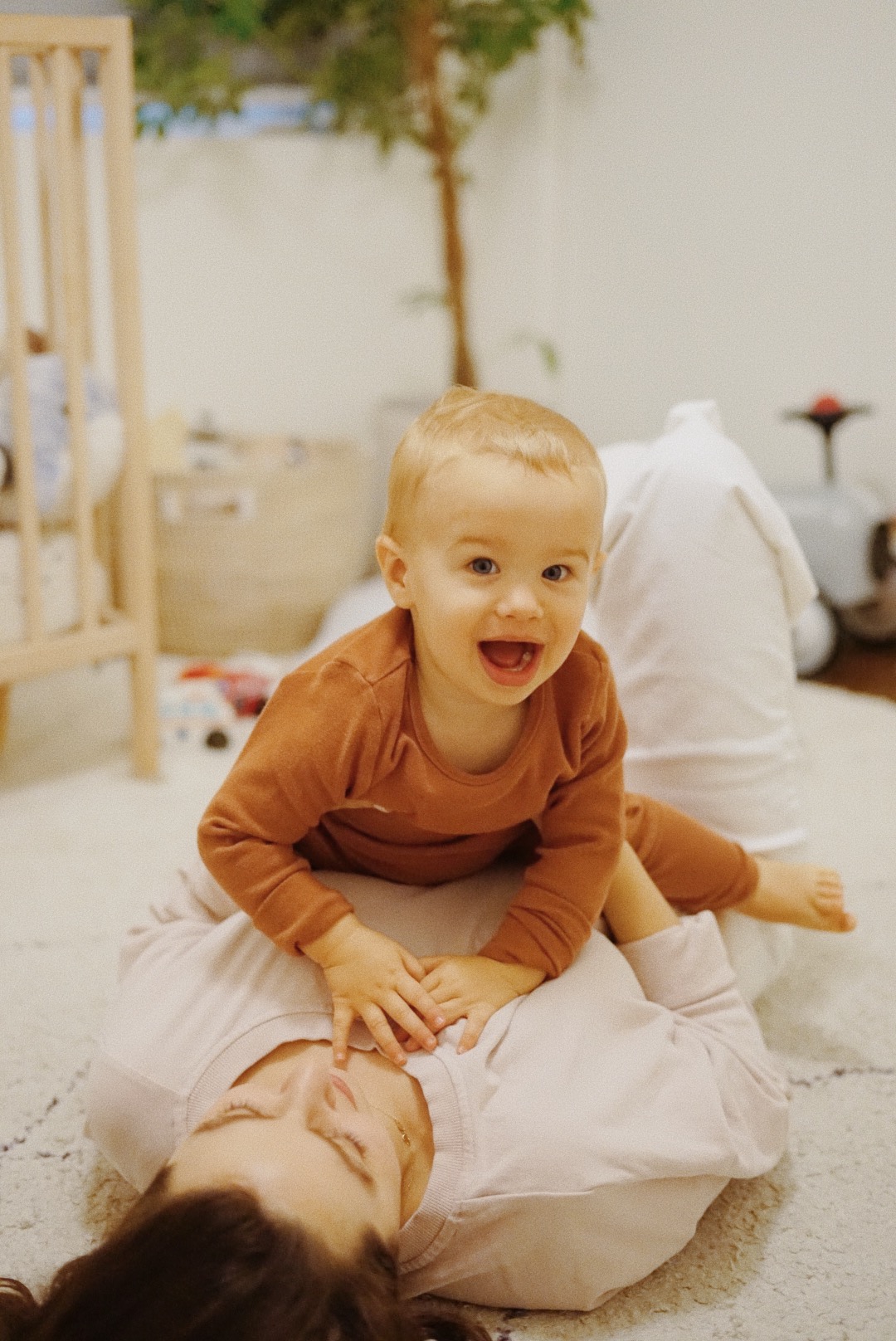 once he’s “pajama-ed”, he loves to play with his toys because his toys are NEVER more fun than at bedtime haha– we’ll all play together usually, racing his cars, doing puzzles or looking at some of his books. being the little weirdo he is, sometimes he just likes to get in his crib and play with his stuffies for a bit before reading. 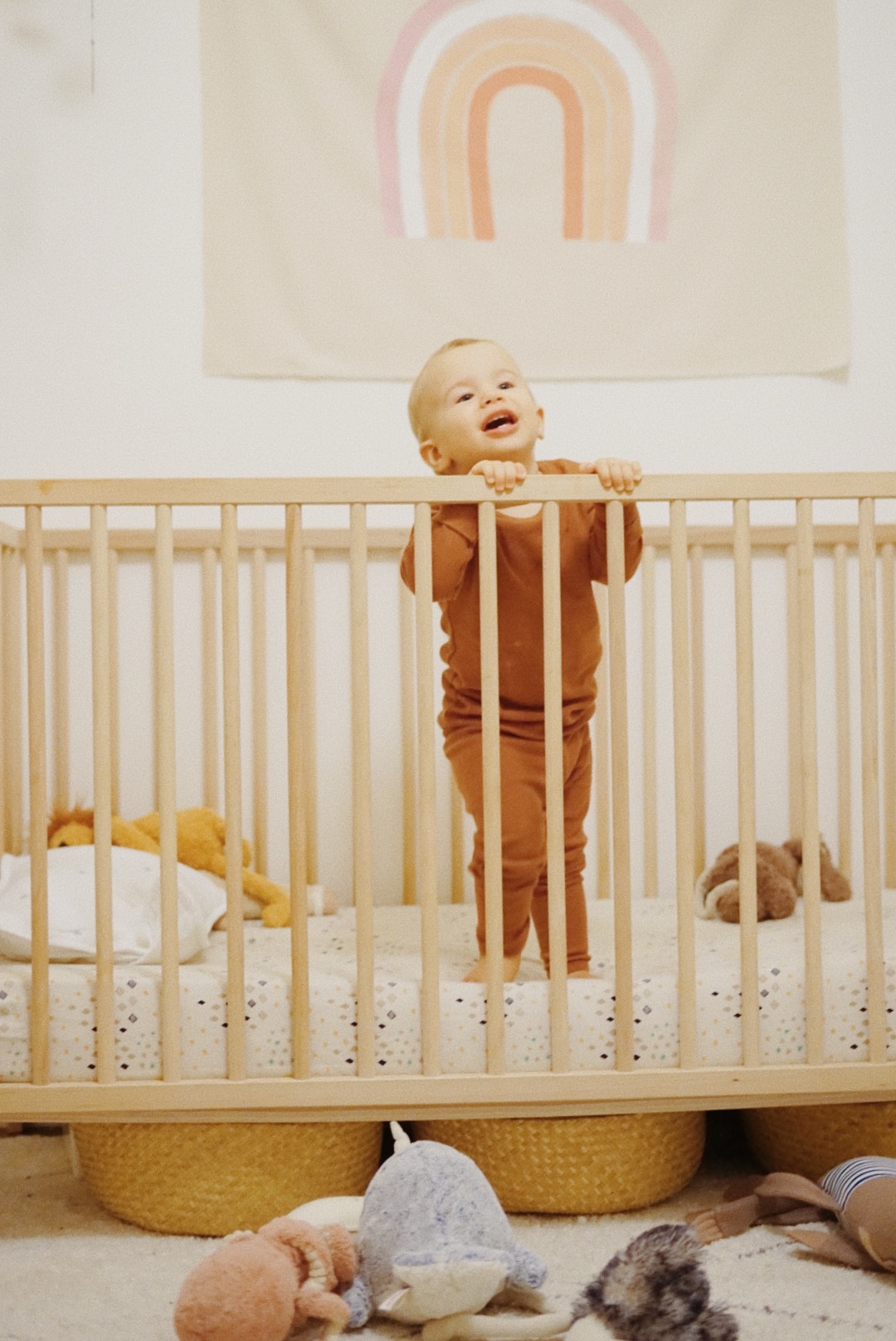 again if you’ve followed along on instagram for most of arlos life, you know he loves to choose his books at night and has been doing it since he was a TEENY BB!! back then he used to choose between two, now we hold him up to his shelves and he picks out 2-4 books himself.

if gid is home — this is the time i’ll usually leave and go finish making dinner. arlo will give me a big kiss, wave goodnight and then gid finishes up, but gid usually works late at least one night a week, so when he does i’ll put him down myself. 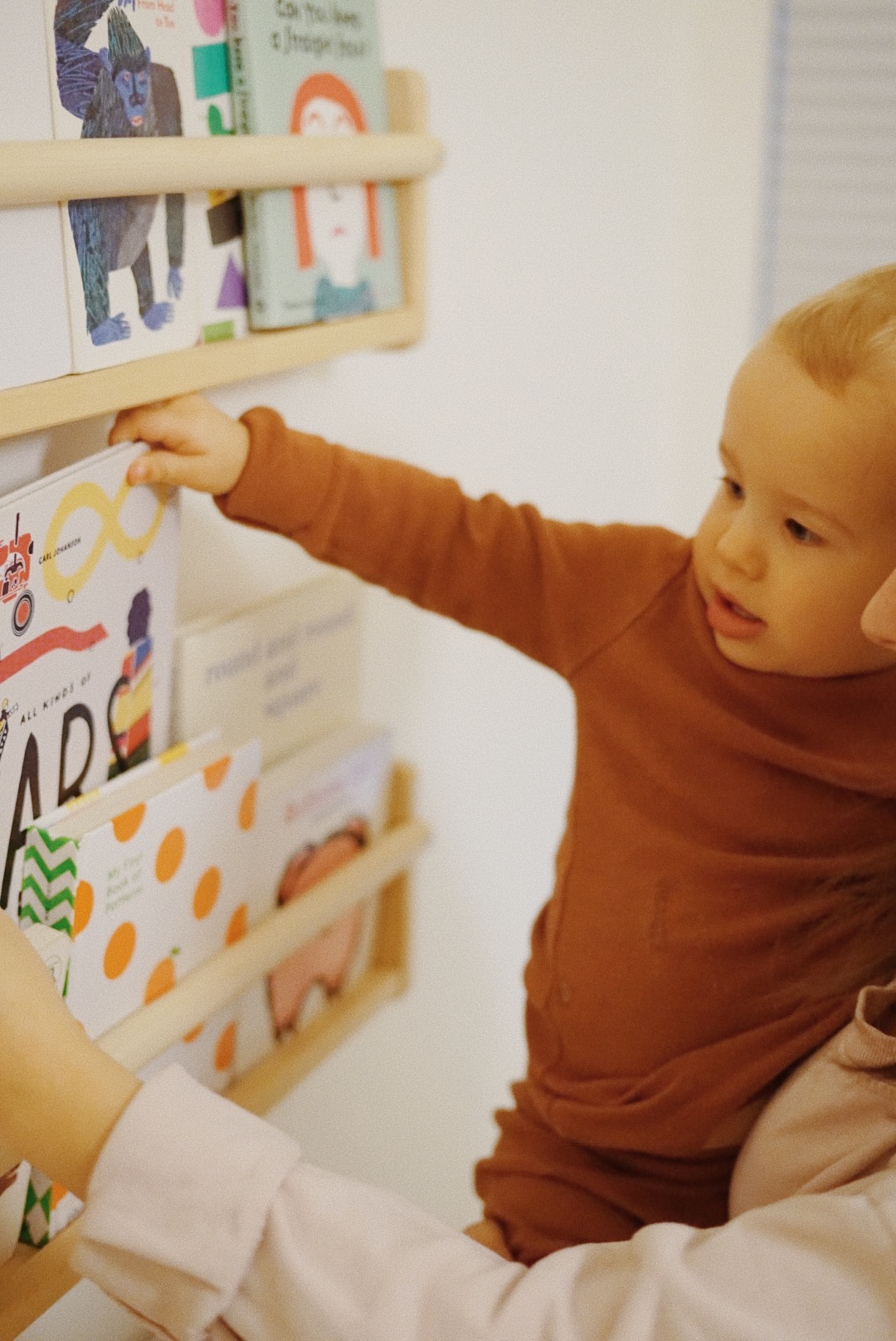 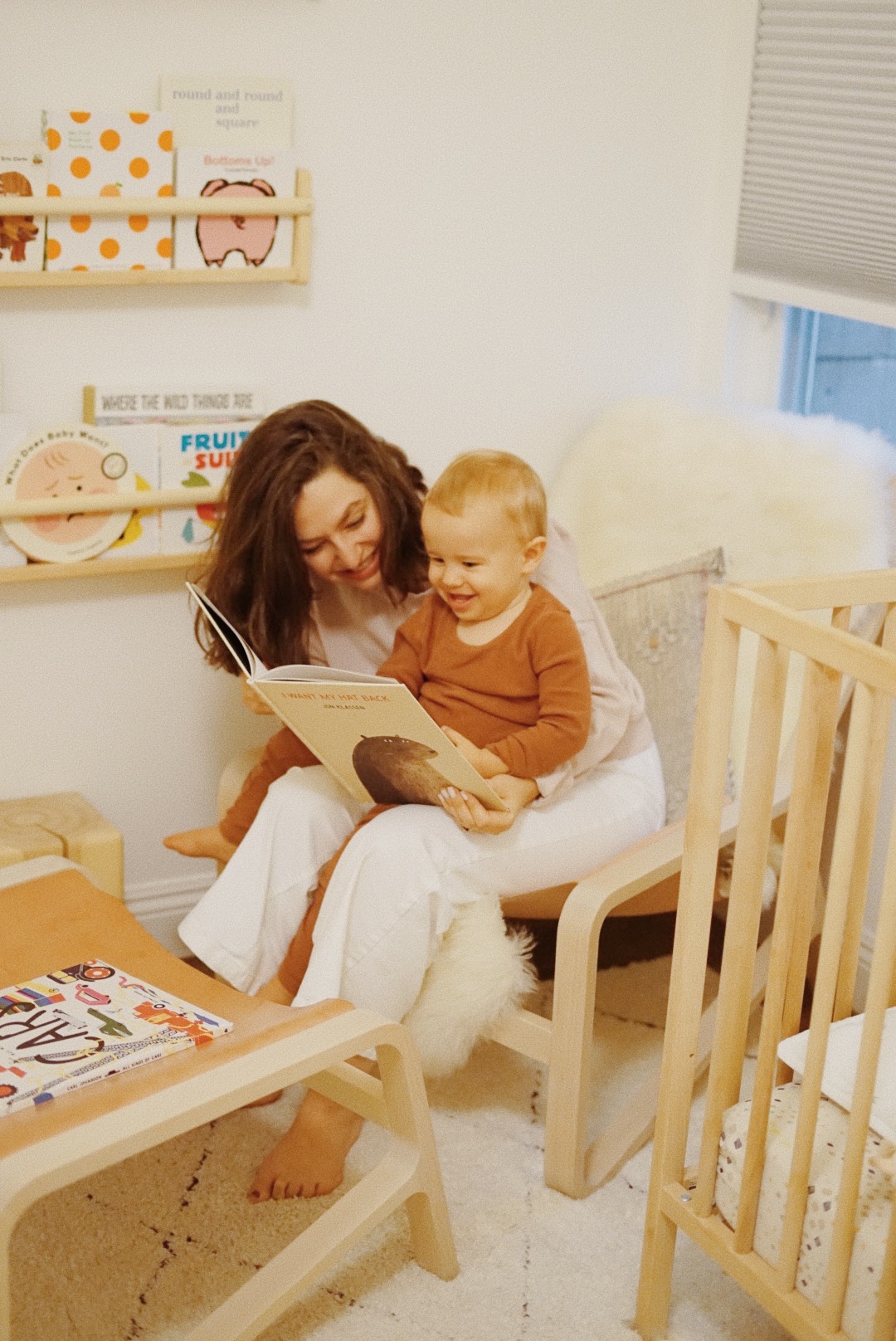 when we’re done reading, arlo will turn around to give me a kiss — then i turn up the white noise and turn down the lights. i walk around the room with him on my shoulder usually singing the same couple of songs (so far away by carole king was the first one i ever sang to him, and still is the first one i’ll do at night). i pace around in the dark until he’s super relaxed and then i gently place him in his crib. sometimes he’s not having it and he’ll immediately stand up and cry me for me to pick him up, some nights he’ll start whining but i’ll leave the room and he’ll be so tired he realizes why fight it? once he’s in his crib i just tip toe out. 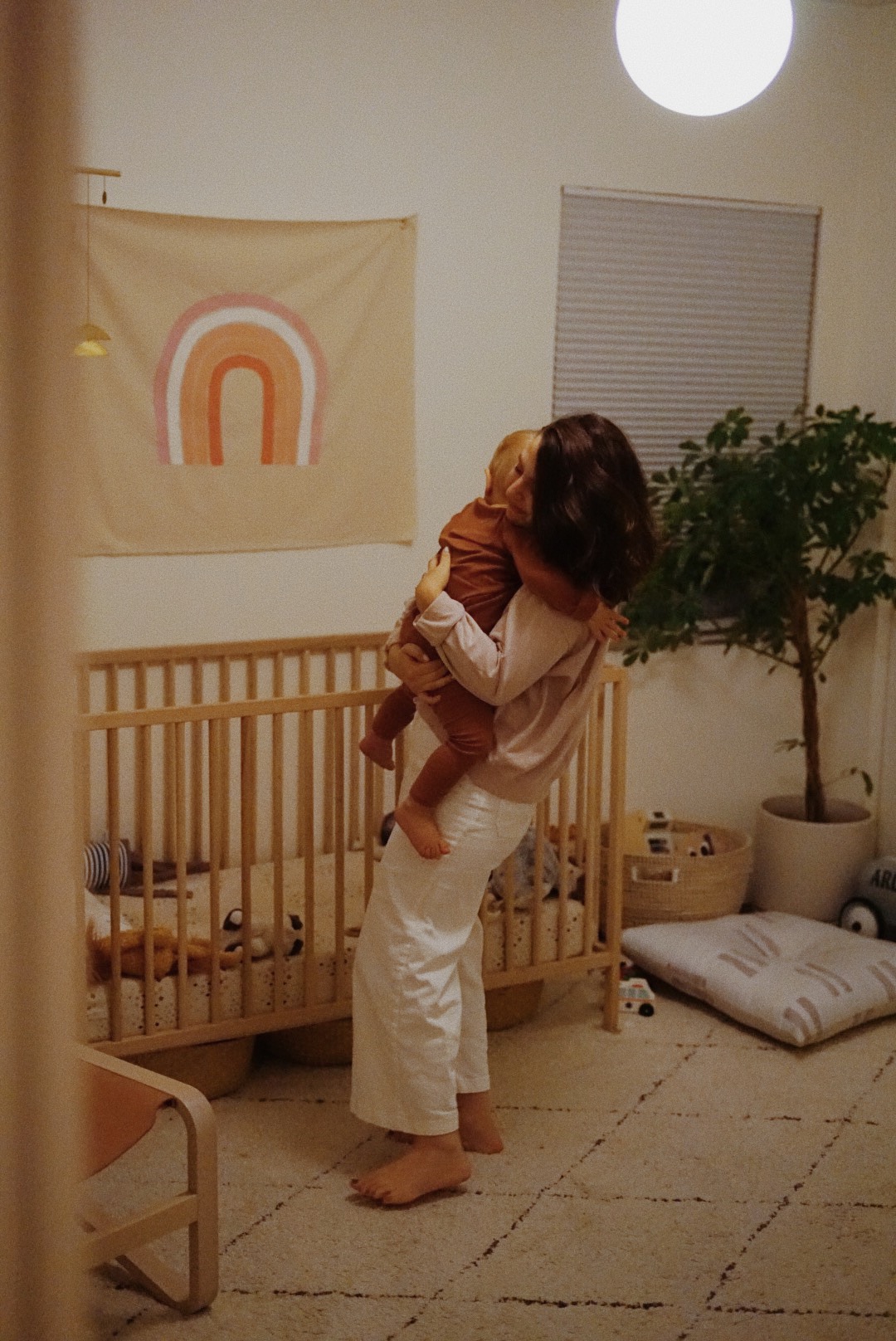 and that’s it! super simple. i am really amazed by the soraa home lightbulbs. the light feels so much more natural than a normal lightbulb, and anything to help promote bedtime is good with me. you can learn more about soraa healthy here. and use code MOLLYLIGHT for 15% off your order.

PS, apparently this nighttime routine works, because full disclosure — we shot this after his nap and he started getting tired again from “acting out” the routine hahah.